Many markets for miscanthus 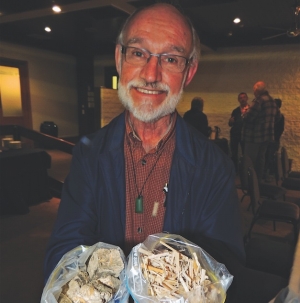 FUEL, BEDDING, shelter, forage: super-tall perennial grass miscanthus could have markets as all of them, says Miscanthus New Zealand, a Te Awamutu-based company promoting the crop.

The grass is already fairly widely used in Europe and the United States as a bioenergy crop but was only introduced to New Zealand in 2010 with about 40ha now established in various crops and trials nationwide.

Vegetative propagation is by splitting plantlets, or cutting out rhizomes from the considerable root-mass the plants develop after a couple of years.

It’s that root mass which gives the C4 grass its ability to regrow to 3-4m every summer. Being a C4 plant, the foliage isn’t frost hardy so when winter comes it dies off leaving dry stems which can be harvested for fuel, or, as Rural News’ sister paper Dairy News reported last week, left as shelter for stock.

Brown says cuts close to 40tDM/ha have been recorded but he works on 20tDM/ha/year as a conservative yield for his costings.

At 20% drymatter the harvested miscanthus, which is usually cut and baled in large squares, releases about 15gigajoules/t of energy.

“It’s on a par with low quality coal.”

With every gigajoule worth $5 to $10 depending on market, that’s a gross

return of $1500 to $3000/ha. The higher value would require pelleting, Brown says, but enquiries to Carter Holt Harvey and Genesis Energy show bulk sales of bales at the lower value are possible.

“Carter Holt Harvey are serious enough about it they’ve planted 9ha of their own,” Brown told a meeting in Ashburton last month.

Cutting and baling in July-August would be at a time when such machines are normally idle so getting contractors shouldn’t be a problem and other than harvesting there are few, if any, annual growing costs as the grass out competes weeds and to date, hasn’t suffered serious pest or disease attack anywhere in New Zealand or further afield.

Establishment costs depend on method, but Miscanthus New Zealand recommends cultivating and applying a layer of residual herbicide similar to the mixes used for maize before planting in a 1m grid. Plantlets come in at 58c each with a minimum order of 1000.

Rabbits have also been found to attack small areas of recently planted miscanthus, but larger-scale plantings, or established plants, haven’t had a problem.

Rhizomes are a cheaper option, at 20-25c each, but are only available for plantings of several hectares and are a less reliable establishment method. To date hand planting has proved best but mechanisation with potato or various other vegetable type planters is being investigated.

Planted once risk of frost is past, a 1-1.5m tall stand can be expected in the first season, followed by 2-2.5m in the second year, and the forests of 3-4m shoots thereafter. Stands elsewhere in the world have lasted decades.

Besides fuel use – there’s the potential for extraction of biofuel as well as simply burning the stuff – harvested green the crop has an ME of about 9MJ/kgDM so there’s potential as a low quality forage.

Harvested dry with a forage harvester, or perhaps baled and put through a chopper at a later date, it can be used as a bedding.

“It’s much more absorbent than sawdust or straw,” says Brown.