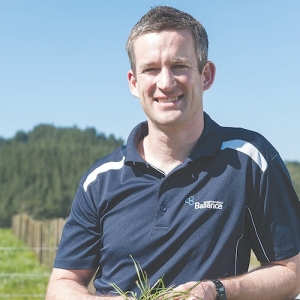 PASTURE RESPONSE to nitrogen fertiliser will this spring be predictable more accurately by a new computer model unveiled by Ballance Agri-Nutrients.

Dubbed N-Guru, the decision support software was designed in partnership with AgResearch to improve the efficiency of nitrogen use on pastoral farms.

Soil total nitrogen tests are a routine aspect of soil testing and where total nitrogen varies sufficiently across the farm the model can be used to determine variable nitrogen use instead of applying nitrogen at uniform rates.

Ballance sales staff are already offering N-Guru as part of a fertiliser recommendation to aid decisions about nitrogen use.

Given the low cost of getting total nitrogen tested, and the potential gains, “it’s a no-brainer,” says Ballance’s science manager, Aaron Stafford. “With N-Guru we can now more accurately predict the relative pasture response and confidently tailor our advice accordingly.”

For example, if soil tests on a 100ha dairy farm show 50ha has a total nitrogen content of 0.7% based on soil dryweight, and 50ha has total N of 0.3%, that would be sufficient to warrant the use of N-Guru.

In the high-nitrogen area the model predicts an extra 7kgDM of pasture would be produced per kg of nitrogen applied, but in the low nitrogen area a 13kgDM/kgN response can be expected.

Without N-Guru, typically 30kgN/ha would have been uniformly applied over the farm, producing an average 10:1 response and an extra 30,000kgDM. With the insight from N-Guru, 60kgN/ha could be applied to the low-N area in two applications, and none to the higher-N area, giving a 13:1 response and an extra 39,000kgDM from the same amount of fertiliser.

Converting that extra 9000kgDM to milksolids at 12kgDM/kgMS, that’s another 750kgMS in the vat, which, at $6/kgMS, is worth an extra $4500, Ballance calculates.

With the exception of some allowance for effluent blocks, “nearly all dairy farms have been taking pretty much a blanket approach to nitrogen rates on pasture,” Stafford told Rural News.

“They’ve known they get more or less response on some paddocks but haven’t known why or how to respond to that…. This is another step forward in our ability to give expert advice, adapted to each part of the farm and firmly based on knowledge gathered from a large number of pasture response trials carried out nationally.”

Initially he sees the tool mostly being used to tune rates to blocks of paddocks across farms according to soil type and land use history, but in due course applications may be fine-tuned to individual paddocks, or even variably applied as spreaders cross paddocks using GPS systems and maps.

“We are always looking at ways to support farmers in increasing production while making the best use of their fertiliser budget and reducing impact on the environment.

“By improving nutrient use efficiency through the strategic and targeted use of nitrogen, the risk of associated nitrogen loss is reduced and the cost benefit of fertiliser-nitrogen application increases.”

Development of the N-Guru software is ongoing, based on feedback from farmers. Stafford says he expects it to deliver about a third of the improvement (ie a fifth to two-fifths) in on-farm nitrogen-use efficiency that Ballance is targeting with the Clearview Innovations PGP.

R&D manager Warwick Catto says the co-op has made nitrogen and phosphorus efficiency a high priority in the PGP project, aiming to increase nitrogen uptake efficiency from the usual 10:1 return to 15:1 and to increase phosphate efficiency by 20% while minimising losses.

A phosphorus management plan called MitAgator will be available by early 2015. It identifies areas at high risk of phosphorous and sediment loss, as well as nitrogen and microbial losses.  It takes data files from Overseer, links it to a geo-referenced farm map, soil map and digital elevation model.