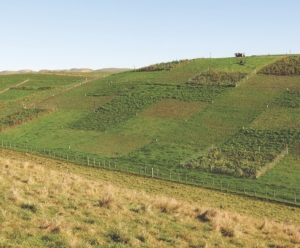 AT LEAST 40% of New Zealand is too steep to cultivate yet still less than 1000m above sea-level.

The challenges of improving pasture on such land are considerable, but as the early results of a long-term project show, establishment of more productive species is possible.

What’s more, with the work on four contrasting sites around the country (see panel) on-going as part of the Pastoral 21* initiative, the findings promise to fine-tune best practice for improving and maintaining such country in the future.

“There is potential to substantially increase pasture production and herbage quality, particularly in late winter and spring,” explains AgResearch pasture scientist Katherine Tozer, lead author of a paper on the project to be presented at November’s New Zealand Grassland Association conference.

“That’s where the financial gains can really be made,” she stresses.

While data analysed to date is only from the establishment phase of the pastures, Tozer says the aim is a 400kg DM/ha increase in feed grown in early spring and improved pasture quality over summer-autumn, with about a one unit lift in ME (metabolisable energy).

“A year down the track we will have information on this from this project.”

The lift in quality, say from 10 MJME/kgDM to 11, can make a huge difference to stock performance, she adds.

What the establishment phase has shown is that even in a wetter than normal year – plots were sown spring or autumn 2011/12 – getting legumes, grasses and herbs to take by broadcasting is challenging.

In only a handful of situations did more than 50% of seed applied produce viable plants and, in many, the establishment percentage was in single figures.

The NZGA paper analyses the influence of four treatments on establishment: aspect; season; location/site; and seed mix. The trial also includes establishment following fallow or summer brassica, but that data is still to be analysed.

Autumn broadcasting of seed was more successful for most species, for example, 36% of perennial ryegrass seed established, compared to 13% in spring. The mean for all grasses was 22% establishment in autumn, to 9% in spring.

Aspect also had a significant impact: the mean establishment of all species on south faces was 14%, compared to 8% on north faces; for ryegrass it was 31% to 18%.

“Broadcasting seed on south aspects during autumn is likely to result in the highest establishment of sown grasses and legumes, but not necessarily herbs,” the paper states.

However, the authors and Tozer, stress the season was an unusually wet one so the establishment work is being repeated this season with a fine-tuned selection of species.

“The ones that performed poorly in that first year were consistently poor, so given the scale of the project; it makes sense now to target our efforts on the better performing species to see whether we get a similar ranking –regardless of whether it’s a good or poor year for establishment.”

As for seed mix affects, on average establishment of the grass-legume-herb mix (GLH) was higher than the legume only (LEG) mix by 14% compared to 8%, but white clover was one of the exceptions within that trend, 17% taking when broadcast alone, compared to 8% in the GLH mix.

“White clover is likely to be suppressed in a seed mix containing grasses, legumes and herbs and may establish best if sown before the grasses,” suggests the NZGA paper.

In the trial 10m by 10m randomised plots were sprayed off with a robust rate of glyphosate 7-10 days before broadcast sowing by hand. In practice, helicopters would likely be used, putting establishment cost in the region of $6-700/ha, says Tozer.

Following broadcasting, trial sites were briefly mob stocked with sheep at 500/ha, something that should be replicated on field scale, she adds.

“That’s very important. If you don’t have good seed to soil contact the chances of getting good germination plummet.

“We’re doing additional studies on the sites to look at leaf litter’s influence to see whether it helps or hinders establishment. On the one hand it can stop seed to soil contact. But if the seed can get through to the soil, the litter can act as a mulch preventing it drying out. However, it can also harbour pests, so the results are going to very interesting.”

* Pastoral 21 is a joint venture between the Ministry of Business, Innovation & Employment (MBIE), Dairy NZ, Beef + Lamb New Zealand, Fonterra and the Dairy Companies Association of New Zealand, aiming to increase pastoral production while reducing farming’s environmental footprint. AgResearch manages the programme with a range of other organisations contributing to the research.