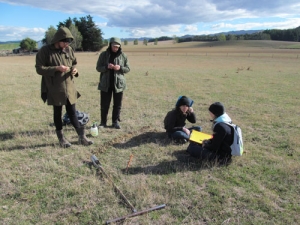 Lincoln University students at Glengael Farm during their soil-mapping exercise.

A group of Lincoln students recently spent four days conducting a soil survey of Glengael Farm, near Cheviot, to see if soil-mapping was a worthwhile strategy for increasing farming productivity and minimising the environmental damage caused by agricultural practices.

The student exercise was part of a larger research effort, known as the Forages for Reduced Nitrate Leaching Programme (FRNL), led by DairyNZ in partnership with several Crown Research Institutes.

The programme encompasses a range of projects aimed at reducing nitrate leaching losses from pasture and forage crops.

Glengael Farm is one of nine monitor farms in the FRNL programme.

Almond says soil-mapping could allow farmers to carry out practices that are specific to their property and relevant to local soil characteristics.

“This may increase plant biomass production and animal health and provide long-term financial and environmental sustainability.”

He says farmers could be encouraged to follow Glengael Farm’s example of obtaining a detailed soil map.

“The more this happens nationwide, the more reliable and accurate the information base will be, which will further encourage efficient farming practices and pro-environmental actions in the wider agricultural community.”

Glengael Farm is a 484.4ha property that produces sheep and beef, running 2000 breeding ewes and carrying 1000 hoggets every year, as well as 60 beef cattle and 160 dairy grazers.

During their survey of the farm, the Lincoln University students carried out a detailed spatial analysis of the soils at the property in order to produce a comprehensive map.

For each soil type, pits were dug to 1.5m deep and the key soil features were identified under New Zealand Soil Classification.

The students then worked with Landcare Research’s S-map national soil survey team to produce fact sheets for each soil and assess them in terms of nitrate-leaching vulnerability, drainage ability and water-holding capacity.

“The farm was then subdivided into a patchwork according to combinations of soil and landscape characteristics,” says Almond.

“This allows the farmer to use separate management strategies for each landform, according to the nature of the soil.”

After carrying out their survey, students came up with a number of recommendations for the Glengael farmer and the FRNL monitor farm research team.

“They suggested that creating management zones which aligned with the soil-landscape units would be beneficial to encourage sustainable, efficient irrigation and nutrient application,” says Almond.

“They also said plants should be chosen for their particular traits and applied to the different soils accordingly to improve production and reduce environmental impact.”

“This could be a particularly useful technology on Glengael Farm, because of the variable and strongly contrasting soil pattern,” says Almond.

“Different soils are able to produce highly productive crops, according to their particular properties, which precision technology can help to pinpoint.”

“This is a management tool that applies varying amounts of water to match specific zones,” says Almond.