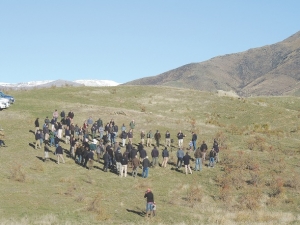 “The engine room for all that was lucerne. It shows what can be done when tucker isn’t a factor. Then it’s just down to genetics.”

That insight prompted a shift in priorities back home at Bog Roy: feeding ewes became the focus, with lambs sold store.

With more feed being grown in the station’s paddocks, and the shift to selling store, pressure on hill country has eased. As a consequence it’s now growing more feed too.

“The free lunch with lucerne is what it does for all the rest of your ground,” Anderson commented to the field day.

With more feed grown and saved on the hill, feeding out over winter’s been cut from 100 days to 30 days for most classes of stock.

He was warned of possible set-backs with stock on lucerne, such as clostridial diseases or bloat, but to date hasn’t had any issues. And when he has had a management question, Beef + Lamb New Zealand’s technical text answering service, manned by Lincoln University lucerne guru Derrick Moot, and others when necessary, has always provided a quick answer, often before he’s left the paddock, he adds.

With 153ha now sown with the crop, Anderson says he’s “pretty happy” with progress, though long-term he reckons 15-20% of the station could be converted.

“We’re still in the very early stages with this, I feel, but we’ve already had heavier store lambs, 2kg heavier, and produced 500 more lambs off the same number of ewes.”

Converting Bog Roy’s lower native country with contour sown lucerne hasn’t come cheap. Mulching briar and other woody plants, establishing a ryecorn crop, then sowing the lucerne, cost up to $2000/ha. But even allowing for that Anderson says the internal rate of return on investment has been calculated at 27%.

“That means we could borrow at 27% interest and still break even on it. That hit me right between the eyes. We’ve just spent $160,000 over 12 years on getting an irrigation consent renewed. Imagine if we’d spent that on dryland development instead!” 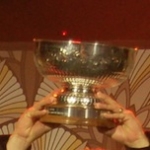