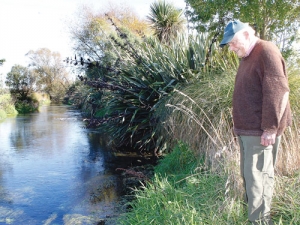 Farmer Bill Wilson admires the much improved Waikuku stream, one of two streams for which the Waikuku Water Management Group has won an Environmental Award from Fish & Game.

Bill Wilson smiles as he looks down on the Waikuku Stream: below him is a superb example of a restored lowland Canterbury stream.

The efforts of Wilson and his fellow farmers have recently been recognised with an environmental award from Fish & Game.

The Waikuku Water Management Group is the first recipient of North Canterbury Fish & Game's 'Working with Nature Award' for outstanding efforts to improve local freshwater habitats. The award recognises what Fish & Game describes as the dedicated efforts of a number of farmers to protect and give back to the Waikuku Stream.

North Canterbury Fish & Game's environmental advisor Scott Pearson says the new award acknowledges a growing number of farmers who have taken their own steps to improve or protect streams and rivers near their properties.

"Fish & Game has been critical of the plight of many Canterbury streams and rivers, but at the same time we actively seek workable solutions to the problem. The awards are a great opportunity to celebrate some local success stories," Pearson says.

The group is delighted with the award. Its leader Bill Wilson says they are especially pleased to be the inaugural winners.

"The group felt it was time to pay back something to our waterways which have been such a benefit to their families. Our members have focused on 100% compliance with their effluent management, and getting recognition for their water management over several decades is hugely satisfying.

"We are delighted with Fish & Game's decision to institute the award to recognise suitable groups for their performance in helping the environment."

The group won the prize for devising an innovative way to decide who most needs the limited water available at any given time. This allocation is critical over the spring and summer periods when low flows in the Waikuku Stream require consented water users to carefully manage how much water they take.

By collectively sharing their water allocation, the group has found a solution that is more sustainable for both the environment and their farming operations.

"What the group does sounds simple, but it's really quite ingenious. Instead of focusing on what resources they don't have, these farmers have pooled their water resources and worked together," Robinson explains.

The group has also extended its commitment to the environment with significant stream-side restoration and enhancement, planting thousands of trees and shrubs and fencing up to the Waikuku's springhead source.

"The results speak for themselves. The salmon are now back in the Waikuku, with healthy numbers returning to spawn. All the more special is that this wonderful sight is now uncommon in lowland Canterbury streams," he says.

Bill Wilson puts the group's success down to a simple philosophy. "We work on the simple principle that it is better to work with people than against them. As a result, over the years we have been blessed with help from many people.

"In fact, one of the first was in the 1980s when professor Wally Clarke was involved with Fish & Game. We took him on a tour of our various projects and he proved to be a great mentor for our group. This tour exercise has been repeated many times with great effect," says Wilson.

Wilson also pays tribute to his group's members, a good bunch of North Canterbury farmers with a great attitude and team spirit.