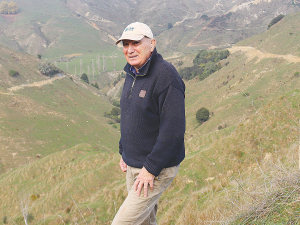 One of the recent challenges facing Trevor Johnson and his team at Paparata Station has been the changing climate.

It's something that has happened quicker than they'd expected. Johnson says they used to lamb late, with the idea of taking stock through on the farms after Christmas.

"But we got into a situation where the feed supply in January did not match the demand," he explains. "So, we are lambing earlier with the idea of getting as many stock off the properties in the November December period."

Johnson says, in the past, they relied almost entirely on natural water for stock but less rainfall now means the natural water sources are not giving 12 months cover. As a result, they have installed a large water system with 50 troughs and more will be installed. He says having trough water also means stock are not encouraged to get into natural sources and damage the water quality.

Johnson says with less water and higher temperatures, they've also had to change their farming systems. More research has been done on which legumes will grow where, and to find out what species might grow on the hills without the fertiliser they are using.

Johnson is committed to a sustainable farming system and is investigating ways of reducing methane emissions in sheep by way of a breeding programme.

"As a third generation farmer, my goal is have a happy farm team and to ensure that the property is sustainable for the next generation," he told Rural News.

To that end, Paparata is an innovative, practical model farm. It is led by a man who constantly has an eye on the future and who is willing to share his knowledge and experience.

Four into one goes nicely

Instead of running Paparata as one station, Trevor Johnson has divided it into four separately managed blocks - each designed to complement the other and run by four separate managers.

The so-called Forgotten Highway, between Taumaranui and Stratford, has many surprises to offer - if you care to stop and look. In farming terms, one of these is Paparata Station, near the settlement of Tokirima, owned by Trevor Johnson. Peter Burke recently paid a visit to this magnificent property.

"Climate change and how quickly it's happening is the biggest challenge for us," says Trevor Johnson, owner of Paparata Station owner - 50km west of Taumarunui.