Four into one goes nicely 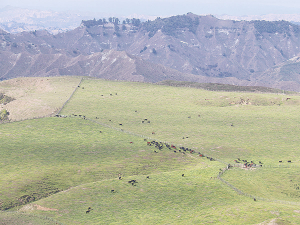 Paparata is divided into four separately managed blocks - each designed to complement the other.

Instead of running Paparata as one station, Trevor Johnson has divided it into four separately managed blocks - each designed to complement the other and run by four separate managers.

The blocks have their own name - Paparata, Te Moata, Tokirima and Heao. Two of the blocks (Te Moata and Tokirima) are set up for a terminal sire to be put over their respective ewe flocks. Meanwhile, Paparata runs a standard breeding programme and Heao is where an elite Romney ewe recorded flock is run, with the express purpose of breeding rams for sale. DNA testing is used to select animals for this flock.

Most of the hoggets on the properties are put to the ram, assuming they are up to weight. However, those that don't lamb are put onto the farms with the terminal sires. Those that do lamb go into the breeding blocks.

Each unit has its own manager and staff, while there is a repairs and maintenance group which works across all four properties.

"I could have one manager I suppose, instead I've divided it up into units of roughly 1,500ha," Johnson told Rural News.

"This allows for good management and each manager can cope comfortably with that quantity of stock units. They don't do any financial management, but instead focus on the management of the stock, which works for them. As the overall owner and manager, I take care of the financial issues."

Today, Johnson and his wife Trish live on a small block just outside Hamilton.

Johnson says he's lucky because he has had great loyal staff who have stayed.

"One manager, John Manning, has been working for me for 32 years, another 25 years and another for 15," he says. "The latest one - Rachel Hall - has been with me for five years and she has won the Te Kuiti meat processing supplier of the year three out of four years."

Johnson says three of his managers started with him as shepherds or junior shepherds, and they have grown up thought the operation.

"The key is what I do for them, in terms of caring for them and providing good housing and generally being very supportive," he explains. "As a result, I get a lot of satisfaction seeing people grow in their jobs and go onto the next level."

One of the recent challenges facing Trevor Johnson and his team at Paparata Station has been the changing climate.

The so-called Forgotten Highway, between Taumaranui and Stratford, has many surprises to offer - if you care to stop and look. In farming terms, one of these is Paparata Station, near the settlement of Tokirima, owned by Trevor Johnson. Peter Burke recently paid a visit to this magnificent property.

"Climate change and how quickly it's happening is the biggest challenge for us," says Trevor Johnson, owner of Paparata Station owner - 50km west of Taumarunui.