This farm is no pig sty! 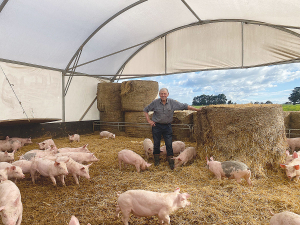 Bryan Tucker’s Wairarapa farm is testament to the pork producer’s strong commitment to the environment.

Minimising livestock and feed transport, using pig effluent as a fertiliser source and extensive native planting are just some of Tucker's approaches to good environmental management on the farm, near Greytown.

Almost half the 1,300 tonnes of barley used to feed the pigs each year is grown on the farm. The pigs are raised on bedding, which is composted as an additional source of nutrients that is applied to surrounding paddocks. Pig effluent goes into a slurry pond to be turned into fertiliser, mixed with urea, for the farm's dairy operation with 1,000 Friesian, Jersey and Kiwicross cows.

Tucker, who is the third generation of his family to farm the land, says good environmental management combined with good genetics, high quality feed and excellent stock management is the key to successful pig farming.

"That leads to contented pigs and quality pork for New Zealanders."

The New Zealand pork sector has a low environmental impact compared to other forms of livestock production. The sector currently contributes just 0.2% of New Zealand's total agricultural greenhouse gas emissions and pigs produce much less methane than ruminant animals like cattle or sheep.

The fertiliser spreading system was devised by Tucker, with pig effluent making up about half of the fertiliser used on farm. He believes it provides a more balanced fertiliser than straight urea.

"We give the effluent pond a real good stir in autumn and spread that using irrigators with pivots. Mixed with urea, it's brilliant fertiliser. Sludge from the pond is also removed every year and spread using a slurry tanker."

The planting programme on the farm began in the early 2000s. In 2003, Ngarara won the Dairy Farm Award in the Greater Wellington/Wairarapa Farm Environment Awards. The extensive native planting has included, among others, mānuka and kanuka, olearia and totara. Space is also leased out to beekeepers, so there are a lot of hives on the land.

Tucker's son-in-law Gary Healy has managed the piggery, a farrow to finish operation, for many years. It is home to around 2,500 pigs at any one time, comprising 245 sows and the rest being growing pigs.

A nutritionist comes to the farm regularly to advise them feeding the pigs.

"Our focus is on caring for them in way that is best for them," Tucker explains.

"There is currently no better system available than the farrowing crates," Tucker says.

"We waterblast and disinfect their 'rooms' for them and when we open up the gates, they literally run along the races to get to the crates because they know they are going to have their piglets there and they're warm and happy and well fed.

"The system also protects the piglets. Everyone comments how contented and healthy they are."

The piglets are weaned from the sows at between 3-4 weeks of age and placed into straw based eco shelters for 6-7 weeks. They are then shifted into purpose-built buildings and fed a liquid feed barley-based diet until ready for market.