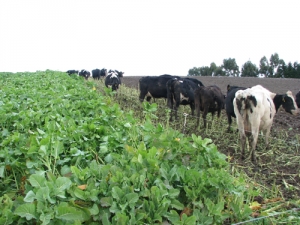 Cropping farmers are being urged to consider the true cost of winter grazing to their businesses.

During a series of grower workshops in recent weeks the Foundation for Arable Research (FAR) has outlined best practice and highlighted potential pitfalls.

“We’re looking at the whole farm system and brassica and fodder beet are an increasingly important part of what cropping farms are doing,” FAR’s Ivan Lawrie told one of the workshops.

Even in 2009, 30% of arable farms were growing such forage crops for dairy grazing or finishing beef or lambs on, and that percentage “has grown substantially in the last five years,” he says.

“Traditionally this wasn’t our space but we felt it was falling between the cracks…. There wasn’t any integration between the three levy organisations getting information on these crops out to everybody.”

Now, partly with Government funding, the organisation is working with other sector bodies to develop best practice guidelines and put numbers on the impact of various winter grazing techniques on subsequent crops. “That’s not been easy to do,” notes Lawrie’s colleague Diane Mathers.

Initial work has identified some evidence of compaction in winter grazed areas compared to non-grazed. Soil bulk-density tests taken pre- and post-grazing towards the end of winter on seven farms by FAR found a range of 1.08 to 1.36 before grazing to 1.15 to 1.48 after, where untouched soil would be 1.0 and severely compacted 1.4.

“You can rip the soil but it’s not going to fix that [bulk density] problem overnight,” says Lawrie.

Mathers says the wet-weather compaction reduces soil aggregate stability, impairing rooting and increasing risk of run-off and erosion. “Obviously if we’re going to wreck our soils we’ve got a bit of an issue.”

Some farms have reported yield impacts on following crops as much as three years after a severe winter grazing event, but there’s been no scientific study to establish how severe or how widespread such incidences are. “Perhaps that’s one of the areas we need to put work into,” adds Mathers.

“You get denitrification in cold wet soils so there may not be as much there as you think. And heaven help us if we ever get back into talking about emissions because that’s another loss farmers will get hammered with.”

Losses through drainage may also be considerable: Mathers noted that at one workshop an Environment Canterbury representative said about half the nitrogen lost on arable farms comes from “that little bit of dairy grazing”.

Catch crops could rise in importance in crop rotations, particularly as the regulatory spotlight lights up the environmental impact of winter feed crops.

Southland farming leaders and environmental activists have called for a breather in their set-to over winter grazing practices.

Successful grazing of crop paddocks is achieved by good management of people, cows and the environment, says DairyNZ.