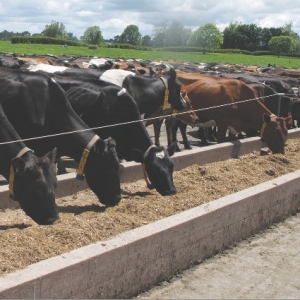 WELL MANAGED woodchip is the best stand-off for cow care judging by the findings of a Dairy NZ research project.

During the trial 80 pregnant non-lactating cows were split into groups and allocated to one of four different stand-off surfaces for eighteen hours/day, and pasture for the remainder of the day.

After four days of this on-off regime, they had a week on pasture with researchers continuing to record lying times as well as signs of leg health, walking gait and dirtyness.

Cows were twice as likely to lie down on the woodchip stand-off pads as they were on concrete, and towards the end of the four-day stand-off period on concrete they were only lying on the pad for just over an hour at a time.

“Cows were choosing to lie down in the paddocks instead and in extreme cases will actually graze while they are lying down,” notes Schulz.

Cows on 12mm and 24mm rubber matting stand-offs lay down for roughly half the time of those on the woodchip surface. They also tended to get dirtier than those on concrete or woodchip surfaces.

Schulz says the total lying time for the cows on the 12mm rubber mat did not reach recommended lying times and should therefore not be used for prolonged stand-off purposes.

“Well managed wood is the best surface for stand-off pads as cows on woodchips rest more and have a reduced risk of lameness. Concrete areas should never be used for stand-off.”

DairyNZ Farm systems specialist Chris Glassey says while woodchip stand-off pads are the best of the uncovered options it’s with the caveat of good design and maintenance, including replacement of the woodchip. Effective drainage is key to their longevity and a revisit of farms that were involved in a trial with such stand-offs eight years ago found only one third were still using them.

“The guys who were said the most important determinant of the success of the structure was the investment of drainage underneath,” notes Glassey.

Stand-offs on Fonterra’s Jordon Valley Farm are heavily used, 600 cows going on them for 18 hours/day for 10 weeks during winter, when the area gets 300mm of rain.

Glassey says this was by far the heaviest use of all farms researched yet stock were still willing to lie down on pads at the end of the winter.

“Cows at the end of that period were lying down and were comfortable: that’s excellent management.”

Staff had replaced shavings three times and ripped pads once to assist drainage.

“On our own farm we ran tests on how long we could go without replacing surfaces and it worked out to be 50 days…. You really need to replace material at least once a year and you will probably need to keep material on hand if you intend to use pads intensively.”

Farmers involved in the trial suggest digging a hole in pads at the end of winter to work out how much material needed replacing and what the state of the pad is, adds Glassey.