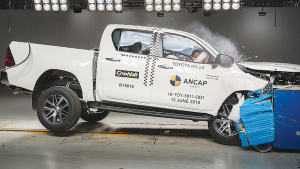 It was recently re-submitted for testing against the more stringent 2019 criteria and the venerable ute again came away with 5 stars.

The upgraded ANCAP rating stems from a bunch of mid-life safety additions.

These include autonomous emergency braking capable of detecting and reacting to other vehicles, pedestrians and cyclists; active lane keep; and an advanced speed assistance system fitted as standard on all variants of the vehicle.

In the tests the Hilux achieved 96% for adult occupant protection. This was enhanced by fitting rear seat belt pre-tensioners and an occupant detection system. Now the ute is rated 87% for child occupant protection in dual-cabs, 88% for pedestrian protection and 78% for its safety assist features.

“We wouldn’t normally see such significant safety upgrades like this until a new model or generation of a vehicle,” Stocks said. “Now New Zealanders in the market for a Hilux can be assured they’re getting the latest advances in vehicle safety.”