Brexit in my face

Written by  Peter Burke in Dublin 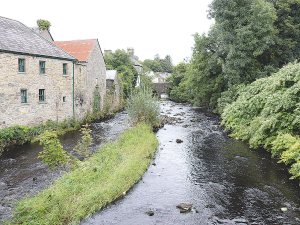 The patch of grass in a stream in the village of Pettigo defines the border between south and north of Ireland.

COMMENT: For the last three weeks I have been a passive observer in England and Ireland of the shenanigans of Boris Johnson and his motley — dare I say weird or eccentric? — political mates as they make political headlines for all the wrong reasons.

Johnson is being likened to a drunk emerging from a pub and driving home without knowing or caring about the consequences.

On every day of my visit to the Disunited Kingdom and the Republic of Ireland, Brexit has been front page news.

While some commentators see the whole thing as a joke  and take delight in poking fun at Johnson – asking, for example  “Who needs Netflix with Boris and Rees-Mogg centre stage?” --  others point to deep underlying fear among the Irish and the thinking people in the UK that disaster is imminent.

British people are concerned about their jobs, their ability to travel freely to Europe and, oh dear, there is a warning they won’t be able to take their pet dogs with them to France on holiday without special permits, which could take months to obtain.

Many are still oblivious or simply don’t care about the impact Brexit will have on the hard won 1998 Good Friday peace agreement which ended the killings and bombings.

People I sat with at the dinner table and in cafes and shops in both Northern Ireland and Eire (Irish Republic) are deeply fearful of a resumption of violence. They point to a sudden rise in the number of bank robberies as suggesting that the private armies are re-arming for battle.

Some people say it may be just a matter of time before bombs start exploding in Ireland and Britain, and they are saying that if this happens Boris and his arrogant followers will be to blame – no buts.

The people I met talked about the intimidation they used to suffer pre-1998 when attempting to cross the border to see family in the north or to go shopping or to watch a football match. They were deliberately delayed for hours for no reason.

The Irish border is the big issue: there are 300 crossing points on the 310 mile border and those are only the official crossings. Some farms straddle the border, with the farmhouse in the Republic and cows grazing in the north. Baileys Irish Cream crosses the border five times during its manufacture. Milk produced in the north is processed in the south. There are endless examples.

The border crossings themselves are invisible. I went through the border town of Pettigo and the only indication that I had crossed from south to north was when UK Vodafone welcomed me to the UK and the road signs were in miles not kilometres. By and large it seems that bridges across small streams are the most visible signs of a border crossing. There isn’t even a marking on the road.

My friends who live in the Republic do their grocery shopping in Northern Ireland because the value of the British pound (sterling) has dropped so goods are much cheaper there. For example they saved 500 euros by buying a computer in the north.

It is hard to fathom how Britain will actually benefit from leaving the EU. True the EU is large, costly and all-controlling and there is the vexed issue of immigration. But up against that is the free movement of ordinary people and goods and services -- and there is the matter of jobs.

Team Boris seem fixated on the proposition that all Britain will be somehow free and that its problems will be solved when the divorce from the EU is effected. But it’s common knowledge that few divorces are quick, simple and amicable. They tend to be costly, drawn out, unhappy and often bitter.

Johnson has just a few weeks to get a ‘nice’ divorce or go back and do more counselling and perhaps not leave. His task of negotiating a deal has been made much harder by the appointment of Irishman Phil Hogan as the EU’s Commissioner for Trade and the person that Johnson will have to deal with. Hogan is regarded as a tough, no-nonsense negotiator and a skillful politician and he will now be central to talks on the post-Brexit relationship between the UK and EU.

When he visited NZ earlier this year Phil Hogan told Dairy News that the island of Ireland needs to be protected from the worst excesses of Brexit and that the Brexit negotiations are as important to Ireland as the 1921 peace treaty with the UK which set up what is now the Republic of Ireland. Hogan also warned that there is a risk that the 1998 Good Friday Peace Agreement could be broken by paramilitary groups in both the north and south of Ireland. Johnson may well have met his match in Hogan.

In the meantime one detects an eerie sense of fear about what Johnson may deal to the people of the UK and Ireland. I have met no one in England or Ireland who wants to have a hard border between the north and south of Ireland. They want peace and prosperity which fundamentally they now have.