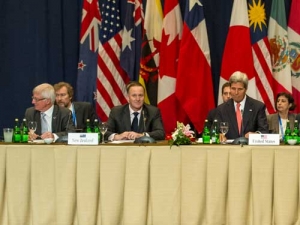 News that the TPP is to be signed here early next month will no doubt fire up outrage.

News that the TPP is to be signed here early next month will no doubt fire up outrage, ridiculous claims and pontificating by the usual array of serial protestors, desperate politicians and other economic Luddites.

These people seem to throw out all sorts of fantastic claims about the evils of trade and their nonsense is never seriously challenged.

Just how our country is supposed to pay for ever increasing demands for better health, education, superannuation and social welfare, while not increasing its trade with the rest of the world, seems to get lost in the venomous rhetoric spewed by those opposed to the TPP and other trade deals.

The fact is that as a trading nation – with agriculture as our biggest trading sector – NZ needs deals like the TPP, the China FTA, CER and the proposed EU trade deal – for economic survival.

No deal is ever perfect and that includes the TPP – notably as it concerns NZ dairying. But despite only minuscule progress for our dairy exports, the deal has delivered some good wins for NZ primary sector.

As NZ special agriculture envoy Mike Petersen said at the conclusion of the negotiations last October, the TPP has delivered an "outstanding" result for the NZ primary sector.

"We have basically gained free trade access for most of our primary sector products – with the exception of dairy and some beef – to 11 new markets with a population of 800 million or 40% of the world's trade."

How is that a bad thing?

A recent World Bank report – 'The potential macroeconomic implications of the Trans-Pacific Partnership" – estimates that the NZ economy will get a definite economic boost from TPP.

As President Obama told legislators in the US during his final State of the Union address last week, a Trans-Pacific Partnership opens markets, protects workers and the environment, and ... supports more good jobs.

"Do you want to show our strength in this century? Approve this agreement," he implored.

It would be nice if NZ politicians would also take up President Obama's challenge and put aside petty politicking for once and approve this agreement.