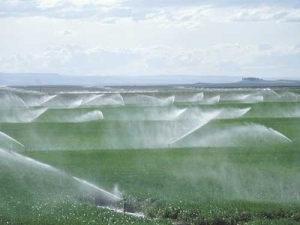 These anti-irrigation groups share a false belief that irrigation schemes only benefit farmers and provide no economic or environmental benefits to the wider community.

Many presentations during the two days suggested ways to communicate the benefits of irrigation schemes to farmers, communities and the general public.

The biggest criticism the irrigators face is the environmental objection to intensified farming and the consequent increase in nutrients flowing back to waterways. Then there's the criticism that allowing this farm intensification is destroying natural landscapes.

Just last week, the Green Party called on ACC not to invest public money in the proposed Ruataniwha Dam, which it claimed "could be a disaster for the Hawkes' Bay environment". The Greens water spokesperson goes on to sneeringly add, "Private irrigation schemes should be privately funded, not out of New Zealanders' pockets."

These anti-irrigation groups share a false belief that irrigation schemes only benefit farmers and provide no economic or environmental benefits to the wider community. This proposition is demonstrably false and it is good to see the irrigation sector go on the front foot to refute it.

Irrigation provides an economic boost, particularly to regions traditionally hit often by long droughts. It was no coincidence that the irrigators' conference was held in the North Otago region. The area was once a notorious drought zone. But the establishment of the North Otago Irrigation Company (NOIC) to take water from the Waitaki River has saved the district and brought many economic, environmental and recreational benefits to the region.

A study released by NOIC at the conference shows that the irrigation has added $45 million to the district's GDP and led to the creation of 274 full time-equivalent jobs. And that sort of economic gain is why both the Government and the irrigators support irrigation.

But as Irrigation NZ chair Nicky Hyslop says, irrigators need to keep telling their story if they are to gain and maintain public support.

And without that public support, they will not persuade an already-gunshy Government to move on with legislation.