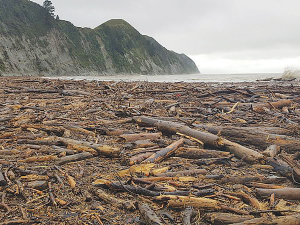 Tolaga Bay was cheek by jowl with logs and slash – unwanted by forestry operators – after the storms in mid July.

OPINION: I was horrified at the results of a weather event in the East Coast of the North Island on July 18.

Forestry – the catch-cry of the current Government for all pastoral ills and the excesses of our modern lifestyles – stood out like an old man caught with pants down. In this case, obese, ugly and exposed in all areas, which when clothed is touted as a saviour.

The hillsides where pines had been harvested, recently disturbed and long since naked of pasture, had let hundreds of tonnes of topsoil into the creeks below and onwards in a watery slurry out into the Pacific. Those areas where the slash and logs were contained mid river, turned into massive, festering, ugly boils on the landscape – often against bridges, culverts or anything that impeded their progress seaward.

Out around Tolaga Bay, and up the east coast, the carnage was truly gut wrenching.

Yes ... it was a severe weather event, but nothing one wouldn’t expect most winters.

I have no doubt, in certain situations and capably managed, pine afforestation is a sensible use of land.

However, I find it ironic that our forestry companies, when touting for business – including some associated to our nationally recognised and supported institutions, such as airlines, gentailers and fuel importers – proudly claim pine afforestation reduces sedimentation and runoff and that there are no negative impacts upon rural communities. Forestry companies also state they are only interested in the lesser class of land and, as an incentive, quote annualised returns per hectare that are twice-to-three times that of pastoral farming.

It is easy to assess the annual average returns on any class of pastoral farming. Our industry body, Beef + Lamb NZ, do it every year and the results are available for all to see.

However, for forestry companies to publicly state that the land they are interested in is uneconomic for pastoral farming is a step too far. The financial returns, which foresters may consider lesser, are at least annual, tangible and spread thought the community in wages and associated industries. The products from pastoral farming itself are tangible, premium class and exported worldwide.

Forestry today is somewhat different in that there is considerable government meddling, incentivisation and complexity. The pastoral farmer will only be paid if he or she is capable enough to bring the stock off the hills and into market.

The potential under the carbon farming model is that pine trees are left up there, sequester carbon for 35 years creating an income and then what?

If land needs be planted for environmental reasons and was planted in natives, in terms of carbon sequestration, these might grow at one quarter the speed of pine but longevity would largely compensate for this. There would be no need to fell. Ecosystems would be enhanced. Investors in this type of afforestation would be making a long-term commitment to match a long-term concern, not a “dash for cash...then trash”, which is the outcome of the current model.

Whether you take the view that in 30 years’ time the world will want NZ produced, quality protein or carbon credits, the choice – for now – is the landowners’.

I have yet to see any forestry analysis that considers the destruction of the wider environment that we all witnessed on July 18.