Time for a culture change 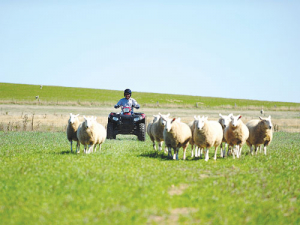 During the past seven years 36 people were killed in quad bike accidents.

It makes grim reading to see that agricultural deaths have numbered 124 over the last seven years – about four times higher than in construction or forestry.

Drilling down in these numbers shows 36 people were killed in quad accidents. At the time of writing, quad related deaths were tracking behind those of 2016 and the terrible year of 2015, but reports of two quad related deaths during the weekend of October 14-15 suggests that the year-end numbers are likely to be similar.

Much has been done over the last few years to promote safe use of this type of vehicle. Many employers now seem to be buying into safety and the use of some type of helmet is becoming more obvious, but there are still too many people dying.

The fact that we have already equalled deaths caused by ATV accidents for the 2016 year, with two and a half months to year end, does not make palatable reading; the crux of the matter is that our loved ones are still dying.

We need to get all sectors of agriculture to buy into safety, particularly the over-60s, who make up a disproportionate number of all types of farm deaths and, no doubt, still carry a ‘she’ll be right’ mentality.

Safety must become a first thought and not an afterthought, which in the case of quads needs to start back when someone buys such a unit. Manufacturers and retailers must insist on some form of compulsory rider training programme. This might have to be incorporated into the cost of the machine. Likewise, insurers must consider charging a premium for untrained operators or discounts for those who have been trained.

Some will say far too many machines are being sold second-hand, but we must start somewhere. In a similar vein, while it’s heartening to see riders wearing inexpensive ag-hats, it needs to be understood that they are only rated to 30km/h and need to be changed for a good quality, certified helmet.

We hear the plea that ‘proper’ safety helmets are too heavy, too hot and no use on the farm. The same argument was initially used by motorcyclists on the road, but they must wear one, or face a fine, so why do we have to make exceptions for a sub-sector of the community who are at real risk?

We also need to stop the practice of allowing underage children being allowed to ride full-sized machines. These are just too powerful, too big, and too heavy for youngsters to be in full control. Again, we hear the cry ‘its different out on the farm’. However, a logging operation would be quickly shut down if a 12-year-old was even on site, never mind found operating a machine.

WorkSafe and its ambassadors have done good work over the last three years to bring safety awareness to the forefront. But many of us still seem to suffer from a bravado that says ‘that’s the way we’ve always done it, and never got hurt’.

However, who in all honestly that has spent any time on a quad, can put hand on heart and say they have never thought “blimey, that was a close thing” or taken a knock they’ve not told anyone about because of making a silly mistake? Not many, I would wager.

On-farm transport was revolutionised with the arrival of quads, but really came of age with the side-by-side.