Too many people are dying on farms 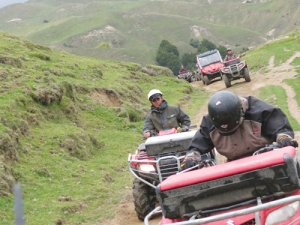 The current workplace health and safety law has been in place since 1992 and the responsibilities of those in charge of a workplace have not substantially changed since that time.

The Pike River mine tragedy and the subsequent independent taskforce report on health and safety in the workplace highlighted that New Zealand is far behind other countries in protecting people at work.  Our health and safety performance is twice as poor as Australia and six times worse than the UK.

More people are injured and killed in agricultural workplaces than in any other single sector. To bring down the social and economic toll, WorkSafe is working with the sector to better inform businesses of their health and safety responsibilities and how they can meet those responsibilities. Hence more focus on workplace health and safety which adds to a productive debate.

In 2010, quads were recognised as causing serious harm and fatal incidents and much research was done to determine the factors behind the injuries and fatalities. The research identified four contributing factors to injuries on quads:

Here are some facts about passengers and helmets:

It would be inappropriate to rely on a single set of data. There is US research (A Pilot Study of Fatal ATV-Related Incidents Involving Passengers, August 2014) that concludes that the extent of rider injury in quad incidents is increased when a passenger is being carried. Australian research (yet to be released) into the overall stability and use of quads concludes “…adult sized vehicles should only be used by a properly trained 16 years or older rider, and with no passengers permitted, unless the quad has been specifically designed and manufactured for such use.”

All manufacturers also explicitly require head protection as a safety measure. Some would say this is simply a case of manufacturers avoiding litigation but these warnings are issued because the manufacturers are aware of the design limitations of the vehicles and are required to advise users of the limitations.

The bottom line for quads, and for all workplace safety, requires the following:

This is a solution, but not the full solution to the overall toll of injuries and fatalities on farms. The bottom line is that engineering solutions are not available for many of the injuries suffered.

• Al McCone is the agriculture programme manager at WorkSafe New Zealand. He was responding to the letter from James Jarden in Rural News, June 2 about workplace health and safety.