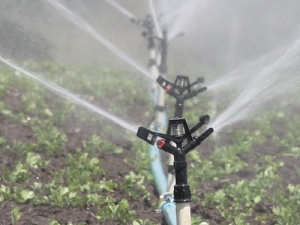 Using only 1.8% of our water for irrigated farms contributes between $2.2 billion and $3b to NZ's economy.

Much media debate has arisen recently on whether new irrigation schemes are necessary in the wake of the dairy downturn.

What the dairy industry doesn't need at the moment is to be kicked when it's down; the debate has brought to light a need for IrrigationNZ to better foster relationships and promote understanding of modern irrigation across the board.

Let's start with the facts: in NZ water is plentiful. We average 145 million litres per person in NZ compared with 82 in Canada, 22 in Australia, nine in the US, two in China and two in the UK. We are water rich but are yet to make the most of this potential.

The issue is harnessing the resource. We need water in the right place at the right time. Water storage projects that in part provide for irrigation development are the solution to this problem. The benefits for NZ Inc are huge if we better harvest and distribute just a small percentage of our water resource. Currently 98.2% of the water that falls as rain and snow makes it out to sea.

Using only 1.8% of our water for irrigated farms contributes between $2.2 billion and $3b to NZ's economy, and double this in terms of the benefits to the wider community from adding value to irrigated produce. For example, NZ wouldn't have a wine industry without irrigation.

Irrigated agriculture underpins many of the provincial economies on the East Coast.

But irrigation is about far more than increasing production; it is also an insurance against drought. Climate modelling suggests droughts will become increasingly common in many parts of the country including some areas that have a limited history of water storage and irrigation – Northland, Manawatu and Bay of Plenty. This puts farming and the viability of local and regional economies at risk.

Certainty about water means farmers can confidently plan for the future and are more able to cope with market fluctuation and changing weather patterns.

Another point to be disputed is that irrigation makes for high cost production – it is unaffordable in the current commodity downturn. This couldn't be further from the truth. Well-run irrigated dairy farmers have some of the lowest production costs per unit of production.

Colin Glass, chief executive of Dairy Holdings, says that the cost of production in Canterbury – compared to dryland farming in the South Island – is generally lower because of the extra grass production and corresponding increased milk solids production that comes from irrigation.

What people are frequently missing in all the commentary on the dairy downturn is the need to maintain production, not just cut costs. Irrigation does just that: it maintains production.

It's also good to remember irrigation in the regions supports far more than just dairy.

The reality is that dairy accounts for about 50% of the irrigated area in NZ, with 25% relating to sheep and beef finishing and the remainder going into horticulture, arable and wine-growing. A reliable supply of water is the only way to diversify production.

So what about the environment and water quality? All the new and proposed schemes address environmental challenges that have arisen over time, including inherited water quality concerns as a result of increased land use and general population growth in urban centres.

Studies such as at Opuha have shown that with irrigation comes the next generation of innovative farmers and poor performers exit.

We need to continue to take a long-term view to ensure the best use of our water resources, while maximising the advantages for each regional community and looking after our environment.