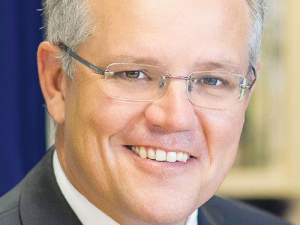 New Australian Prime Minister Scott Morrison’s first trip in the top job was to a drought-stricken farm in Queensland.

Morrison, who took over from ousted PM Malcolm Turnbull after narrowly defeating Home Affairs Minister Peter Dutton, has made the crippling drought in NSW and Queensland his top priority.

NSW and Queensland farmers have had to hand-feed sheep and cattle, sell stock and in some cases even shoot them to end their suffering as they run out of hay and grain in the severe conditions.

The Turnbull government had pledged A$1.8 billion in aid for farmers and local communities.

Morrison has brought back former deputy PM Barnaby Joyce as the special envoy for drought assistance and recovery. Joyce resigned earlier this year after admitting to an affair with a former staffer.

While it’s not a cabinet position, Joyce’s new job is a political promotion for the former deputy PM, who will advise the government on drought relief policy.

Joyce says the nation needed a “holistic approach” to the drought, calling it a “national crisis”.

“One thing we should be looking at – and this will be contentious – is the huge amount of water we have in the commonwealth environmental water holder,” Joyce told a Sydney radio station.

“The new season of hay will come on in about a month. We should be considering using that water to start growing fodder in our southern regions.”

The Labor opposition called on Morrison to bring climate change into his drought policies amid a push by the right wing of his Liberal Party to ditch an emissions mitigation policy which contributed to Turnbull’s ousting.

“If he is not prepared to stand up and say ‘this is a consequence of climate change and I am going to commit to mitigation and adaptation’, then he will fail farmers,” shadow agriculture minister Joel Fitzgibbon told journalists.

While droughts are not uncommon in Australia, the length and severity of the dry conditions have strained farmers’ efforts to stay afloat.

Morrison won’t say if human-induced climate change is associated with the drought in Queensland and NSW because it doesn’t help solve practical problems.

“Climate is changing, everybody knows that,” he told reporters. “It’s a debate I’ve not participated in a lot in the past, because I’m practically interested in the policies that will address what is going on right here and now.”

Australian farmers have thanked Prime Minister Scott Morrison for making drought a priority in his first days in office.

NFF president Fiona Simson says it is time the Coalition government put the chaos of the recent weeks behind them and got on with the job of leadership, including looking after rural Australia.

“What we need now is stability and continuity of leaders. Farmers deserve nothing less.

People reeling from the effects of Covid-19 have one more thing to worry about.