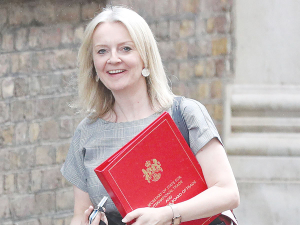 UK Trade Secretary Liz Truss and NZ Trade Minister Damien O'Connor have committed to a FTA between the two countries.

Dairy Companies Association (DCANZ) executive director Kimberly Crewther says there has been a commitment by both the UK Minister of Trade Liz Truss and our Agriculture and Trade Minister Damien O'Connor to come to an 'in principle' agreement on the FTA by the end of August.

She says while this is a positive step, it should be noted that such an 'in principle' agreement is not the final FTA document, which may take several more months.

However, the 'in principle' agreement is a clear indication that both sides are basically at one - although some 'technical' details still have to be worked through by both sides.

On expert commentator told Rural News that this commitment by the two ministers certainly paves the way for a final quality FTA. It's understod that the UK is pushing for greater access to NZ in terms of services - especially financial - while NZ has a strong focus on access for primary exports.

Crewther understands that negotiators from both sides are working hard to deliver on the ministerial promise. She says the agreement NZ is looking for is similar to the one the UK recently concluded with Australia.

O'Connor is also positive about a deal, saying the UK is coming to terms with being separate from the EU. He says this means they need a global strategy of connecting with as many markets as possible.

The UK is also in the process of applying for membership of the Comprehensive and Progressive Agreement for Trans-Pacific Partnership (CPTPP), which require them to adopt a more liberal trade policy.

With the EU, Crewther is less optimistic, saying their past leaked offer in respect of an FTA was 'insulting and significantly inadequate'. She says any future offer would need to be a vast improvement to gain any credibility, as far as NZ was concerned.

"The ball is now in their court to come back with something that would actually meet the quality of what should be achieved," she says.

O'Connor concedes that it will take longer to get an FTA with the EU across the line. He says he had good meetings with politicians and officials in Brussels and gave them the message that a EU/NZ FTA would not spell ruin for their farmers.

"All were concerned that the trade agreement would not undermine any of their interests globally and we gave them that absolute assurance."

O'Connor hopes that early next year, they will reach a point where they can get a general agreement with the EU.