Where to for the UK? 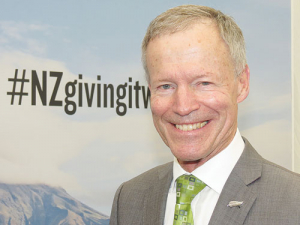 Smith, now a member of a UK free-market think tank, has concerns about the Brexit negotiations for Britain’s future.

The problem is that if it were to get into a tie-up with the EU and its rules, that would prevent Britain from being able to negotiate other free trade agreements, which it would like to.

Smith told Rural News that goods and agri-foods would suffer most.

“For example, they won’t be able to negotiate a free trade agreement with the US while they are locked into EU rules.

“Likewise, one of the four big trade agreements the UK would like to pursue joining is the CPTTP. However, to be a part of that agreement requires members to have control over their own regulatory arrangements which Britain wouldn’t have if it was linked in any way to the European Union.”

He says joining the CPTTP would be important for the UK and there are many positives for Britain if it leaves the EU. “But if they end up in a half-way house situation they are better off in the EU,” he believes.

Many Brexiteers are calling for Britain to develop its own smart, global strategy in the same way NZ has done, Smith says.

“NZ’s trade strategy is viewed by the rest of the world as very smart. The UK needs to do something similar, but it can’t until it severs its ties with the EU.”

Smith agrees that the EU has played ‘hard-ball’ with the UK over its leave negotiations. However, he believes the UK hasn’t helped its own cause because Theresa May’s Conservative Party has been unable to agree on anything, least of all a sensible strategy.

He says in this regard, the UK has let the EU off the hook in the negotiations.

Like most observers, Smith says the biggest stumbling block to the EU and UK sorting out a deal is the Irish border issue. He says a lot of effort has gone in over the years to overcome the problems of the ‘troubles’ and no one wants  to see it go back to where it was. But forcing the UK to remain in the EU is not the only solution to the Irish border issue.

“I love Ireland and how things have developed positively. I love the way they play rugby together, but I have seen the difficulties about the Irish border,” says Smith.

“I have been near Belfast and... the troubles are still there. I just hope we can find a way of solving the Irish border problem in a way that works well for the future.”

Sir Lockwood Smith says one realistic and possible solution to the Irish border issue would be for the UK and Ireland to have a trade agreement similar to that between Australia and New Zealand.

He says while there is no customs union between the NZ and Australia, there is a friction-free boarder based on mutual recognition of each other’s regulations and there is sensible give and take on both sides.

Smith applauds an aspect of the NZ/EU FTA negotiations now underway: the EU is keen to show that it can still do FTAs and he believes they are keen to do a deal, but admits there are problems with agriculture, e.g. quotas and geographic indicators.

Smith believes Britain will be limited in what it can do if it remains in the EU – totally or in part.

He says if Britain were to break away there is a chance that, with Australia and NZ, it could lead to the formation of another trading group such as the CPTTP.

In this scenario Britain could play a huge global leadership role.

“How [Britain] leaves the EU will determine their leadership role,” Smith says.