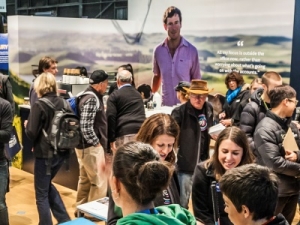 The weather for the first two days of the 47th National Fieldays has held up remarkable well with just the odd shower of rain and nothing to deter visitors.

The word is that the numbers of people attending is up, but that the overall mood is somewhat muted due to the low dairy pay-out but exhibitors saying they are doing better than expected. But there is a feeling that many dairy farmers are walking around the site with their hands in their pockets rather than having their cheque books at the ready. But those at sites offering free advice and generally promoting themselves say they are getting positive responses.

Both Massey and Lincoln Universities say the level of interest is very good and they are getting an excellent flow of genuine inquiries. 'Excited' is the word.

One observer told me that he noticed a larger number of people in 'suits' than usual walking around the displays which he suggests translates into people interested in the wider agribusiness sector coming along.

There have been lots of seminars and functions hosted by exhibitors which have proved very popular and attracted leaders in the agribusiness sector. One of the highlights was the KPMG breakfast on Wednesday morning at which they released their Agribusiness Agenda document. This provides a very comprehensive, accurate and insightful commentary on the issues facing the primary sector and has some positive and innovative solutions.

When Prime Minister John Key opened the event on Wednesday, he noted that the theme of the event – innovation - was very appropriate and that for NZ to keep its place as a leading producer of primary products, on-going innovation was critical.

He says there are all sorts of businesses at Fieldays geared to basically improve the productivity and profitability of what is happening on farm.

"If you walk around the 1000 displays here, a lot of them have an innovation or science bent to them," he says.

As always, Fieldays is a very special event and regardless of the economic climate the array of products and innovations still helps lift the spirits of rural NZ.