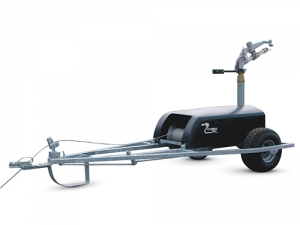 Improvements by Hi-Tech Enviro Solutions to its Cobra travelling rain gun make this irrigator even more of a standout in its field, says the company’s general manager, Brian Nicholson.

“Since its launch in 2013 we have sold many hundreds of Cobras, which have performed exceptionally well.”

Notably, its design allows application depths as low as 1mm, and application rates down to 4.2mm/hour, “which avert ponding and grizzling by local authorities,” the company says.

The Cobra also enables farmers to spread over large areas, with full or partial circles and a setting that allows spreading to one side to accommodate sidling land.

Now come “a number of enhancements at the 2015 Fieldays to make the Cobra an even better performer,” says Nicholson.

These improvements include a new shear bolt safety mechanism that will allow more weight to be towed.  If the Cobra encounters any obstructions or excessive load, the system will activate and protect the unit, and quickly and easily get the machine working again.

Also, a wheel assembly replaces the skid at the front, reducing rolling resistance and making the unit easier to tow and roll on undulating ground.

The wire winding system now spreads the wire evenly across the drum’s full width, with no kinks or snags. And redesign of the main cover hinges allows better access for maintenance

Hi-Tech will also exhibit a shore-mounted effluent stirrer/agitator with a horizontal impellor for effective mixing and low running noise. Features include a modular main body that will allow the differing lengths to be supplied to suit all sizes and depths of ponds, and also reduce initial transport costs.

A new headstock assembly has a self-contained hydraulic system to allow easy raise/lower and lateral movement of the agitator.

Launched in 2012, the Cobra irrigator, designed and manufactured by Hi-Tech Enviro Solutions, quickly became a farmer favourite for its efficiency and ease of use, says the company’s business manager Rob Johnson.