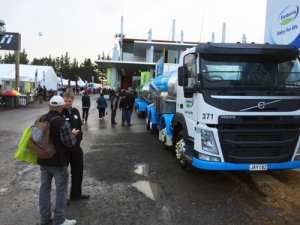 Despite a bit of drizzle here and there, day one of Fieldays 2015 welcomed over 28,000 visitors through the gates - almost 8,000 more than opening day last year.

"There was a great vibe, with people getting around visiting displays, watching competitions and purchasing. The weather played ball for the most part and we're looking forward to a great rest of the week."

Kicking off the day were the Rural Bachelors taking the stage for their introduction to the crowds, before heading to the Heritage Village to compete in their speed dating heat.

Rural Bachelor Daniel Rogers says he is excited for the competition. "Being from Australia, this is an amazing opportunity for me to do things I wouldn't usually get to do."

Kiwi's Best Kitchen wowed the crowd in the Kitchen Theatre, where visitors were treated to demonstrations from 2010 Masterchef NZ winner, Brett McGregor.

The chef kicked off at 9.30am, wrapping up his last demonstration for Fieldays at 3:45pm where he shared his tips and tricks. McGregor says people wanting to get into the cooking industry should put themselves out there.

"If you're studying to become a chef, it's really valuable to be in a commercial kitchen and learn all the idiosyncrasies of the industry. You may be good in class but that doesn't necessarily translate to the kitchen. Having hands on experience is really important."

"It was good to see original material and the standard is really high but there are definitely some standout pieces," says Brooks.

The winner of Ag Art Wear will be announced on Friday at the 2pm shows.

Day two of Fieldays will be full of exciting events and activities promised to wow and entertain, such as fencing skills, the vintage tractor parade in the Heritage Village, Celebrity Chef Michael Van de Elzen in the Kitchen Theatre and many more not-to-be-missed deals from Fieldays exhibitors.

The New Zealand National Agricultural Fieldays is now into its second day and the Rural News Group team are there checking out the action.

The eight finalists for Rural Bachelor of the Year made a stop in their road trip at Te Kuiti, to take part in one the first challenges of the competition.