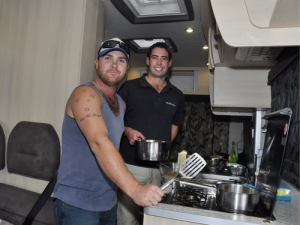 The eight finalists for Rural Bachelor of the Year made a stop in their road trip at Te Kuiti, to take part in one the first challenges of the competition.

In teams of two, the Rural Bachelors had to make breakfast competition judge, Zenna Boroevich who owns a store in Te Kuiti called Oops A Daisy.

The challenge required the men to shop for the ingredients, create the breakfast and present it to Boroevich – all within the KEA motorhome in which they are travelling.

Equipped with a fridge/freezer, sink, gas hobs and microwave, the motorhomes had everything the bachelors needed to whip up a gourmet brekkie.

Judging on the taste, presentation and delivery of the breakfasts, Boroevich says that all the contestants did incredibly well.

“They were really lovely boys and did such a great job – their Mums should be proud! I’m surprised at how nicely they put together their breakfasts; the presentation and overall experience was fabulous,” she says.

“The meals were delicious, but the teams also put a lot of effort into making it a lovely experience for me – one team even asked if they could join me for breakfast and kept me entertained while I ate. It was just lovely.”

First prize went to Sam McNair (from Dannevirke) and Mick Pearson (from Tasmania, Australia), who made a Spanish frittata lined with bacon, with a hand-grated potato and carrot hashbrown, fresh field mushrooms and an orange cocktail on the side.

Boroevich says it was a tough choice, but she chose this team because they made everything in their meal from scratch. The winners each took home a prize of five-day motorhome hire from KEA.

The men are travelling en route to Fieldays, where they will take part in a series of heats before the Rural Bachelor of the Year is announced on Saturday, June 13.

Mainlander bachelors seem destined to stay single, going by their low finalist numbers in the Fieldays Rural Bachelor contest: two out of eight.

Ewes give landslide the slip

It was a Saturday afternoon and it had been raining for two days; Taranaki farmer Graham Fergus decided to move his ewes on a hilly paddock.