New generation tractors designed with the operator in mind 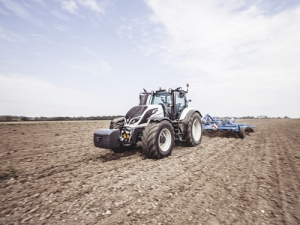 The fourth generation of the Valtra T Series offers models with 155-250hp and up to 1000Nm torque, a large amount of power to take on demanding tasks.

They are available with two transmission variants – Versu and Direct.

The Versu models have the maker’s AutoTraction automatic clutch function for its powershift transmission, which allows shifts automatically by monitoring travel speeds, unlike competitor systems that look at engine speed. Additional features such as hill-hold and hydraulic assistant aid the driver with transport and frontloader operation. The Powershift operates with five steps in four gear ranges, plus 10 speeds in the creeper ranges, giving a total of 30 forward and 30 reverse speeds.

T Series models are powered by 6.6L or 7.4L AGCO Power engines. Exhaust emissions are minimised by a Tier 4 Final SCR system. The SCR system and optimised turbo and engine package results in excellent fuel efficiency and eliminates the need for an exhaust gas recirculation system or diesel particulate filter.

The T174 model comes standard with Valtra’s EcoPower feature. When the driver presses the eco button the nominal engine speed drops to 1800rpm while torque increases. This reduces fuel consumption by about 10%, lowers the noise level and extends engine life. In addition, the Sigma Power feature, standard on all models, increases engine output by 15hp when the PTO is under sufficient load. The transport boost function in turn raises an extra 15hp in the C and D ranges.

The most striking feature of the fourth generation T Series is its new cab – stylish, spacious and quiet. Pillars that curve outwards maximise interior space for the driver and keep the external dimensions compact. The cab is now 20cm wider by the driver’s seat than the previous generation, for plenty of room.

Other features include stereo with subwoofer, cool box, TwinTrac reverse-drive system that can be adjusted laterally and a factory-fitted, fuel-powered, phone-operated auxiliary heater.

The first Valtra tractor joined the Butler family's farming business in 2000, bought in a hurry to work on a Canterbury conversion and proving itself to be capable and reliable. The business has since owned another eight.

Celebrating its 70th year – and having already released the fifth generation A Series in January – Valtra has just announced upgrades to its N and T series tractors.