Breaking through the agricultural challenges 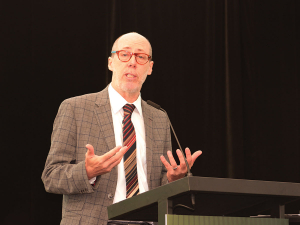 Our growing world needs more food production than ever — yet it will have to be produced with less water and land, and there will be more consumer backlash.

Jack Bobo spent 13 years working for the US State Department, working on global food policy. He more than most is well aware of the problems facing the agricultural world, as the planet’s population races towards 9 billion by 2050. More food will be required then, than at any time in the world’s history. Yet that food will have to be produced with less water, less land and in a way that is far more effective than it is today.

That production will also face consumer backlash as people rally against the impact agriculture has on the environment. “How do we get people to understand and appreciate the opportunities presented by agriculture and not just the challenges?” Bobo asked.

There have been many columns filled with the theory that the world’s food system is moving in the wrong direction, particularly when you consider that 9 million people will die of starvation this year. That’s 22,500 a day, or one every four seconds. Another 800 million people will go to bed hungry tonight. Those are horrifying figures, which you could think confirms the current world food system is not working. But as Bobo pointed out, those figures for going to bed hungry represent 12 percent of the world’s population.

One of the major problems Bobo said, was that most people use today as a baseline, rather than consider what has been achieved leading up to today. He gave an example of the resources required to produce a bushel of corn in the US.

All those reductions came about due to improved agricultural practices, science and technology. Yet still consumers are sceptical and untrusting. Bobo says that is a hard nut to crack, especially when “concern can travel at the speed of light”, via social media and the internet. People tend to worry about things they hear, read or see on the big screen, and not all those fears are accurate he says.

“The food supply today is the most plentiful in the history of the world. The food supply is the safest it has ever been. Yet people have never been more terrified and scared of what they eat. Cancer has been declining for decades, yet people are more and more concerned about getting cancer.”

Despite the science that backs up Bobo’s assertions, he says getting consumers to accept it is extremely hard.

Public perception regarding new technology and agricultural practices will determine if the next 31 years help save the planet or destroy it, he says. But that doesn’t mean he is advocating the use of GMO’s willy-nilly.

“It is important to recognise that you only use genetic engineering as a tool of last resort. If you can solve the problem in some other way, why in the world wouldn’t you do it, because the cost is so much lower and the timeline is so much better.”