Gisborne turns it on 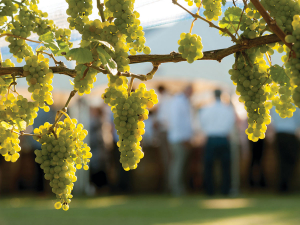 It was a first for New Zealand winegrowers, and an impressive welcome to overseas visitors.

The Chardonnay and Sparkling Symposium held in Gisborne after Sauvignon 19, began in style with a tasting at the Whakato Marae. Never before had a tasting been held in such a unique New Zealand environment.

Guests were welcomed by the iwi of Rongowhakaata, with Stan Pardoe, presenting the mihi.

It came as a surprise to many, including those from New Zealand, that this particular marae has a history that
relates significantly to the country’s wine industry, as Pardoe mentioned in his welcome.

“This is a special place and a most appropriate venue for this occasion. This marae was the centre of the first mission station on the East Coast. Reverend W. Williams arrived in 1839, with the teachings of Christianity. He also brought cuttings of fruit trees and grapes.

“The grapes were grown just alongside here.

“The following year, Catholic missionaries planted grapes at Muriwai thinking they were in Hawke’s Bay.”

Those missionary cuttings went on to bear fruit the following year, before the entourage left Gisborne for their original destination of Hawke’s Bay and helped with the establishment of Mission Estate.

One of the highlights of the welcome was the hosts on buses who eloquently told the history of Gisborne, both from the Maori and European perspective. Guests were taught a waiata while travelling to the marae, which was delivered with enthusiasm more than once during the visit.

After the opportunity to sample wines from 22 wineries from around the country, and a sit down dinner, they were treated to a kapa haka performance.

Many of the internationals, got the opportunity to have a go at a poi dance and a haka, much to the hilarity of the locals.

Day two of the symposium was focused on New Zealand Chardonnays and Sparklings. With panels including some of the biggest names in these two styles, the subjects discussed ranged from clones and their impact on style, yeasts, malolactic fermentation and reduction. Both in reference
to Chardonnay.

There was a break for lunch, which took the guests to Waikanae Surf Club, prior to the Sparkling Master Class. Again, a number of styles were up for interpretation. Rosé, Blanc de Blanc, Blends and new/different styles.

The finale for the symposium and for many of the overseas guests, was dinner at the historic Opou Homestead.

With temperatures climbing to near 30, there was plenty to cool down those attending, including dozens of crayfish, that disappeared as if a flock of gannets had descended.

Gisborne may be much smaller than Marlborough, but when it comes to hosting events such as this Symposium, it punches well above its weight.

Challenged to think and do

The year 2050 was mentioned often in this year’s Bragato Conference.

A Forum for our Young Leaders

At the recent 200 year celebrations in the Bay of Islands, NZ Winegrowers was very pleased to announce a new development to support and encourage young leaders in the industry.