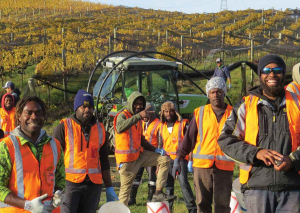 Hundreds of Pacific Islanders stranded in Central Otago during the Covid-19 lockdown may be facing a long wait until they can safely return home.

In March and April this year, there were around 700 Recognised Seasonal Employer scheme (RSE) workers from the Pacific Islands in the region for jobs in orchards and vineyards.

When the New Zealand Government imposed strict pandemic response measures and border closures in late March, they were unable to return home.

“There are groups that have been here for up to seven months and should have been going home in May and June… We’re trying to make sure they can keep earning money with another employer and then come up with a plan to try to get them home.”

Of the 14,400 RSE workers who came to New Zealand from October 2019, around 4,000 came from Vanuatu, which at the time of writing was one of very few places on Earth with no confirmed cases of Covid-19. Ni-Vanuatu people make up the main RSE workforce in Central Otago, and for them it was a trying time as they also awaited news from home of the effects of category five Tropical Cyclone Harold in early April.

Meanwhile, the southern volcanic island of Tanna, where many Central Otago workers hail from, and which was already suffering food shortages from a months-long drought, had crops and food supplies destroyed by volcanic ashfall.

Ni-Vanuatu Chief Donald Nalpin, who has been coming to New Zealand from Tanna for the past 12 years and works for contracting company Viticultura, says it was the toughest season he’s known. Some of his co-workers’ families on other islands had homes and crops destroyed by the cyclone, and relief efforts were hampered by Covid-19 restrictions.

“We’ve never gone through something like this before… Watching all of those people dying overseas. I wanted to go back to my family… But they told us we needed to stay here,” he says.

His team understood that going home wasn’t an option due to cancelled flights, lack of quarantine and limited health facilities in their country, he says. “We could potentially be here for a very long time.”

Viticultura owner Timbo Deaker, whose company employed several “bubbles” of RSE workers, says morale was low among his Ni-Vanuatu workers this year, “especially with the summer team who should have been going home.”

But memories of Cyclone Pam in 2015 led many to believe that they were better off in New Zealand, rather than stretching resources at home. Getting used to social distancing took some effort, Timbo adds, but ultimately they “embraced it 100 percent”.

Bubbles followed strict work protocols, including social distancing and no sharing of equipment, with different bubbles recognisable by the colour of their high-vis vests.

He admits it was a very difficult and different vintage, and his company had two audits from the Ministry for Primary Industries to check they were complying with regulations for operating as an essential business.

“With our 63 Ni-Vans we were able to get through the regulations and get our clients’ crops in.” The costs for hand harvesting this year will be significantly higher as a result, he says.

“But it was about protecting the local community, and the RSE workers.”

Meanwhile, Helen is confident the RSE scheme will continue in future.

“They are a core of the workforce… Over 80 percent of them are returning year on year. Some of the teams have been coming for 10, 12, 13 years.”

She has been working with Immigration New Zealand for visa extensions, so several hundred Otago RSE workers can be redeployed to Marlborough to help alleviate their labour shortage with winter vineyard pruning.

Warm winter clothes for workers have been sourced from charity shops and other donors, and there are also ongoing negotiations with the Vanuatu Government to work out the safest way to begin a repatriation process, Helen says.

Several groups of RSE workers from Vanuatu and Fiji have been unable to come to New Zealand due to the Covid-19 situation, she says.

“They are losing the opportunity to earn some critical income for their families.”