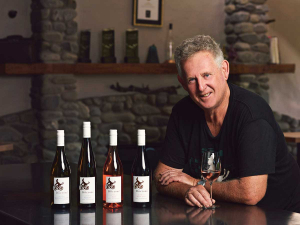 The Marlborough-based founder of Forrest Estate was on a South Island sales trip 14 years ago, when he noticed a keen interest in the 8.5 percent alcohol content of his first ever Doctors’ Riesling.

Recognising a shift in attitudes, he returned home and informed his wife Brigid (the other doctor in the Doctors) that lighter alcohol Sauvignon Blanc would make them rich. The response was a look of “incredulity”, he says. “’Another bright idea John?’ I think she said.”

John’s character traits of determination, risk taking, innovative thinking and determined stubbornness came to good use as he set to the task of lowering alcohol without losing quality. The scientist wanted a Sauvignon Blanc with all the texture, flavour and balance people expected of a full alcohol wine, but sitting at 9 to 9.5 percent alcohol. After two years of disappointing trials in the winery, removing alcohol through chemical means, he moved to the vineyard instead. Picking fruit at 17 brix resulted in wines with an unsatisfying mouthfeel, so he went back to the drawing board, before also rejecting Sauvignon Blanc from unripe grapes.

Then John pondered the plant physiology in the 60 days from veraison to harvest, when the vine grows sugar and flavour while dropping acid and developing phenolic ripeness. “I knew I had it in the first year of the plucking trials, just by tasting the grapes as they ripened,” he says. “They still had flavour but lower sugar.” The next year he had enough to make a small batch of wine, “and the moment I tasted those experiments, I thought ‘aha we’re onto something’”.

After seven years of trials by his vineyard and winery team, and a Government grant that allowed Plant & Food Research scientist Mike Trought to assess the vine physiology at play, John found a way to slow the accumulation of sugar in the vines by trimming “alpha” leaves while leaving less productive older leaves. The result is a longer hang time, so the vines get the late season diurnal fluctuations, so key to Marlborough wine, but don’t develop as much sugar as their unplucked neighbours.

It’s not as simple as it sounds, and developing the system took time. But by 2012 John was satisfied by the quality of the wines, and with the cost of producing them. He wasn’t the only one, because the 2012 Doctors’ Sauvignon Blanc was awarded a gold medal, proving the wines could stand against their full strength counterparts.

That year Forrest exported to the UK, and received a slow introduction to the market. Then a Waitrose buyer read a wine review, contacted John for a sample and ordered 10,000 cases, says John. “I think I had made 5,000.”

Forrest Estate certainly walks the talk of lighter wine, with half its production in the category, including a Pinot Noir, Sauvignon Blanc, Pinot Rosè and Riesling. They’re award-winning wines that have earned respect from the wine intelligentsia, including Jancis Robinson MW, who this year wrote that the Forrest Estate’s Doctors’ range was “a beacon of vinosity in an increasingly abstemious world”.

Thinking bigger than Forrest, John shared his research findings with the Lighter Wines programme, seeing potential for New Zealand’s wine industry to be the world-leading name in naturally produced premium lower alcohol wine. John was a founding member of New Zealand’s Screwcap Initiative, which worked to ensure that every wine under cap met expectation, so that one bad wine didn’t sink them all. Sharing the Lighter Wine information was done for the same reason, he says.

Sixteen years after a sales trip piqued his interest, he says it’s been an extraordinary journey, that’s challenged him as a scientist, grower, businessman and wine lover. “I’m not resting and have great excitement about the potential about even lower alcohol wine that’s still premium.”

Light on their feet