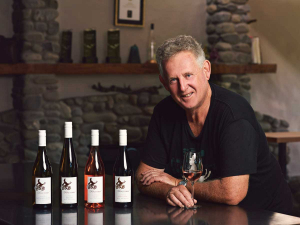 John Forrest with his range of lighter alcohol wines.

Approximately 30 percent of people aged 18 to 34 abstain from drinking alcohol and have a myriad of like-alcohol products to choose from, from Seedlip to zero alcohol beer, he says. “We need to stay relevant to future wine consumers… We don’t want to be the Kodak of the beverage world.”

But New Zealand lighter wines champion Dr John Forrest says the new drive for no-alcohol wines has some “mighty technical challenges” ahead, “to achieve a product that replicates – minus the alcohol – all that we expect in wine”. Referencing the “science behind the scenes”, John says alcohol does more than provide a stimulating lift - “it is also critical to aroma and flavour chemistry and also a foundation for the mouthfeel of wines”.

The Marlborough-based founder of Forrest Wines has been an industry leader in producing wines at 9.5% alcohol or lower, and has spent 14 years perfecting a vine management technique that allows for naturally reduced alcohol wines that emulate their full-strength counterparts. The quality of lighter wines has improved and totally aligned with New Zealand industry’s reputation, he says, and “the same demands need to be applied to all wines and wine-like beverages”.

John says he is “hugely proud” of what the industry has achieved but “very protective of its reputation”. On a recent trip to the UK, he noted the rapid development and interest in wines with no alcohol. They have a place, as do lighter wines, he says, comparing the gradient of wine alcohol levels to fat levels in milk, designed to meet the requirements of a range of consumers. “Wine needs to embrace the same concept,” but zero alcohol wines will only fly if they are as good as the original, he says. “People don’t like changing what they like.”

The techniques of removing alcohol, whether by spinning cone column or reverse osmosis, are the same as those used for 30 years to make “disappointing” wines and beers that lack flavour, balance and weight, despite the addition of sugar, John says. ”Nothing much has changed.” Some of the new flavour capturing technology will help, but the real winner would be a non-mechanical approach to help winemakers manage the alcohol levels over a range, John says. “This is an exciting challenge and one that does not have a simple solution.”

David agrees the step to zero alcohol is a far more challenging proposition than creating lighter wines, because alcohol provides such a big piece of the sensory experience of wine drinking. “We have pushed the threshold with 9 percent, and we led the world on that. That’s the first frontier - now how do we push on to the next frontier?”

He talks of happily sipping a glass of Lindauer Free - bubbles with less than 0.5 percent alcohol - at a mid-afternoon meeting, following the November launch of Lindauer’s new alcohol-removed range. Sparkling is a good first option, because the CO2 substitutes for some of the characteristics alcohol provides, David says, noting that Lion is working to create a “wine-like experience”, with acidity and a length of palate that will satisfy consumers who want to enjoy a glass of wine, but cannot or do not drink alcohol. “And if you’re driving after you catch up with friends, or heading to a yoga class, O% ABV offers the consumer the choice.”

Since its launch in 2014, the Lighter Wines Programme has developed vineyard methods, including natural manipulation of the plant’s physiology, to provide grapes with naturally lower sugar, while retaining good flavour and acidity. In the winery, they have used different yeasts and winemaking methods to lower alcohol while retaining other key characteristics.

However, there is a biological limit to what can be done in the vineyard, and the first versions of no-alcohol wines have used mechanical means to separate the wine and remove the alcohol, then
add the bits back together again. In the case of the Lindauer Free, and of Giesen’s new no-alcohol Sauvignon Blanc (see page 36), the alcohol was removed in a spinning cone column.

David says future work is likely to include study into how alcohol influences the perception of wine, and what other approaches could be taken to lift the aroma. “I think there are opportunities and not a day goes by when I am not thinking about it.”

Alcohol has a “huge myriad of effects” on a liquid, including its impact on fruit esters and complex sugars in wine, says John Forrest. “They are competing and sending different signals to the brain and the brain gets confused about what it’s getting.”

A liquid that tastes like fresh orange juice at 9 percent alcohol could switch to orange marmalade at 14 percent, he says. “Alcohol changes the perception of the fruit aroma profile in the human brain. So that’s hugely significant.” But that’s just the beginning, he adds. “Its biggest effect, in my opinion, is that we love both the sweetness, texture and ‘oily’ mouthfeel that this modified sugar called alcohol gives to a beverage.”

He should know - the scientist and winemaker has tapped into both skillsets, along with extreme confidence in the future of lower alcohol beverages, to produce wines like the award-winning lower-alcohol Doctors’ Rosé, Sauvignon Blanc, Riesling and Pinot Noir, which now make up more than half of Forrest Wines’ portfolio.

Covid-19, e-commerce and the risk of digital debt.

Wine is in Charlotte Read’s blood

The new GM of Marketing for New Zealand Winegrowers can’t help but laugh at how she used to consider anything to do with grapes, “such a drag.”