Mealybugs and under vine management 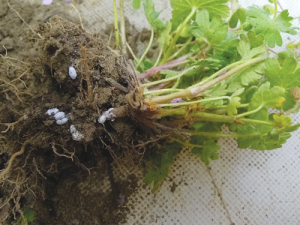 Mealy bugs were found not only on the ground cover plants, but also on the roots and surrounding soil.

Mealybugs have quickly become the bane of grape growers throughout much of New Zealand. The ability of this insect group to transmit leafroll virus from one vine to another has resulted in a large number of vines having to be removed due to this non-curable infection.

Dr Vaughn Bell, from Plant & Food Research in Hawke’s Bay, discussed how the new research programme (funded by New Zealand Winegrowers with co-funding from MBIE) aims to identify new tactics that might slow or even prevent the spread of leafroll virus.

He says the objective of this new research is to define the relationship between the vine, the ground cover plants and mealybugs. Bell added that the provision of an off-vine habitat persisting over time could reduce grapevine susceptibility to mealybugs.

“We need to determine the presence of the mealybugs, the patterns of habitat use within those vineyards – are they on the vines, are they on the ground cover plants, or do they colonise both of those habitats? Factors like under-vine herbicide use and soil cultivation may destabilise the habitat that might otherwise support mealybugs.

“Where mealybugs are present, we want to look at the concept of whether any of those under-vine plants could act as a mealybug ‘trap’, for want of a better term. In other words, are they capable of separating the mealybug from the grapevine effectively and persistently?”

This is a vital piece of information because if the mealybugs are absent from the vine, they can neither acquire leafroll virus nor can they transmit it to healthy vines.

The research, which began in 2015, could continue for a further five years, depending on the results.

It is being undertaken in eight mature Merlot vineyards situated in Hawke’s Bay. Five of those are under “Future” management, and three are under “Contemporary” management (see previous story on why these descriptors have been chosen to differentiate vineyard regimes).

“In November, January and March of each growing season, we will be monitoring the mealybug populations in each of those blocks,” Bell says.

To determine the habitat use by mealybugs, and how that might change during the course of the season (and between years), a combination of monitoring methods are being used, including pheromone traps, assessments of numbers on 200 leaves per block at each visit, and numbers present on 50 ground cover plants per block per visit.

“The pheromone traps offer a passive yet reliable means of determining mealybug presence. The ability to look at vine leaves and ground cover plants concurrently gives us an idea of where those mealybugs are at each of those three points in time, something the pheromone trapping cannot quantify.”

In the first year of the programme, the pheromone traps showed that the citrophilus mealybug was present in all eight vineyards in January and again in April. They were also generally found on the leaves of vines and on the ground cover plants.

“But there was a big variation in the numbers we found on either of those habitats across different blocks,” Bell says.

“In two of the future and two of the contemporary blocks, we struggled to find mealybugs on the vine leaves and on the ground cover plants.”

In another three future blocks, the mealybug numbers were moderate to high (30 – 70 mealybugs for every 100 leaves inspected). It was the last of the contemporary blocks that Bell says was a classic scenario – one that every grape grower fears.

“The mealybug numbers in this block – 450 per 100 leaves inspected – were very high in the vine canopy. The combination of the under-vine herbicide strip and the burning off of the inter-row groundcover during summer meant there were very few ground cover plants able to support mealybugs. Unsurprisingly then, few mealybugs were found on the ground cover plant community. So it is the classic example where they actually had little to no choice other than to colonise the only available habitat – the grapevines.”

While admitting these results are for a single year only, Bell says that there was no clear distinction between contemporary versus future management systems particularly in respect of mealybugs.

“That may change over time, but we will just have to watch and see how this develops over the next couple of years.”

When it came to ground cover plants, Bell says many of the vineyards within the project were dominated by grass and bare ground.

“That is not habitat that mealybug can use. On the other hand, where we found white clover and hawksbeard, it seemed both plant species were readily colonised by mealybugs, suggesting both were deliberately targeted by the insects. It would be nice to determine in time whether or not these plants are more attractive to mealybugs than the grapevines themselves.”

Determining mealybug numbers on ground cover plants did not just mean looking above ground. Each of the plants removed included as much of the root material as possible, as well as a plug of surrounding soil. In terms of the future blocks, 22 percent of clover removed in November was found with at least one mealybug.

These numbers were much higher than what was found on plants like creeping mallow, dove’s foot, plantains and other species we looked at.”

As for the contemporary blocks, very little clover was detected in any of them, which may have been the result of repeated herbicide use. Of the clover plants that were collected, mealybugs were not found. Hawksbeard too was not commonly found, and when it was inspected, only 20 percent of samples were found with mealybug.

The research is also keeping a close eye on the level of leafroll virus in each of the eight blocks.

Long term, this research might just provide another tool in the box for those growers trying to manage and reduce the incidence of leafroll virus.

However Bell emphasises that this research does not change the current process of managing grapevine leafroll virus.

“That is about identifying and removing the virus-infected vines, and managing the insects that transmit the virus to healthy vines. I don’t for a minute anticipate the work we are doing here will replace any of that. Instead, I see it as perhaps adding to the existing set of recommendations for virus management as developed and promulgated by New Zealand Winegrowers.”