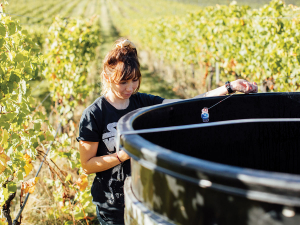 "It is really exciting," says Lincoln Unuversity PhD student Constanza Espinoza-Iversen, who wants to better understand the unique signatures of the vineyard, and the consequences of that microbiology on the wines. "Because when you have different species and strains - they can contribute distinctively to the chemical composition of the wine - the volatile and non-volatile chemical compounds."

Greystone Winemaker Dom Maxwell has been experimenting with vineyard ferments for nearly 10 years, with handpicked grapes destemmed in the vines and fermented in tanks amid the rows, with little protection from the elements. He's watched with interest the difference between those wines - fermenting at the mercy of the climate - and the ones made in the winery.

Wanting to know more, Greystone sought a grant from Callaghan Innovation and the partnershop between Greystone, Lincoln and Callaghan "will add real depth to our understanding of the natural processes, the wines and the biodiversity in the vineyard," says Dom.

Greystone began collecting samples in the 2019 vintage and Constanza began her research that winter. For the past two vintages, she has worked at the vineyard, taking samples from winery and vineyard ferments on 28 consecutive days, in order to understand the growth and demise of an array of yeasts throughout the process. "We were expecting to see more Saccharomyces in the winery and a wider diversity of non-Saccharomyces species in the vineyard," she says.

After each vintage, Constanza returns to the lab to analyse the differences in chemical composition and microbiological diversity during fermentation, as well as sensory analysis of the wines.

With the 2019 results now complete, she is starting to form a picture of the different populations at play, as well as their chemical consequence. In the winery ferments, where legacy yeasts - surviving in the environment from previous vintages - combine with the vintage microbiology, there's a "crazy amount of species", she says. Those ferments progress in a controlled environment, with temperatures between 10degC and 20degC, which is relatively benign compared to the outdoor fermenters.

As the ferment progresses, sugars drop and ethanol rises, many yeasts die, while others, including the "super resistant" Saccharomyces cerevisiae, thrive. "It's hostile for many, but Saccharomyces says 'this is my territory' and it starts to dominate," says Constanza.

In the vineyard there are no legacy yeasts from previous years, and the ferment relies on the signature of the vineyard and the weather in that particular season. The vineyard yeasts also have to endure a far more volatile environment, with temperatures dropping into minus territory and climbing as high as 30degC, says Constanza.

In both environments, the yeast populations each make their mark on the wine, even if they die early on and are consumed by more robust species, "like recycling", she says. "They each contribute to phenolic composition, while others might contribute more to aromatic character, she adds.

Constanza is DNA sequencing the samples to identify saccharomyces and non-saccharomyces yeast change during this process."

Results of the sensory analysis of the 2019 and 2020 wines are to be released this month, after blind tastings with 40 participants in one group, and a quantitative descriptive analysis (QDA), which requires the training of 15 participants, in the second. “That will be great, to see if wine consumers can pick the difference between the winery and vineyard ferments,” she says.

Constanza studied agronomist engineering in her home country of Chile before heading to Antarctica to research the relationship between a grass - Deschampsia antarctica – and the mycorrhizae beneath its roots. She went on to work as a winemaker in several countries, working 15 vintages, including five in New Zealand.

“I love research, but also I love winemaking,” she says. “So, when this opportunity came up, I thought ‘oh my God I need to take this’.” And she is excited to be part of the growing conversation around microbiological terroir, using science to understand the unique signature of place.

“There are so many factors converging during this process to get the final product,” she says. “From soil-plant interaction in the vineyard, to different species of yeast and chemical compounds evolving and transmuting into different flavours, taste and aromas… It’s just fascinating and at the same time a complex process.”