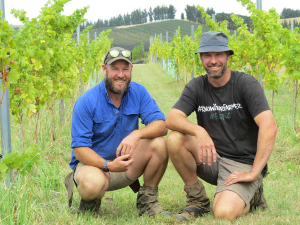 The North Canterbury vineyard’s latest “stepping-stone” is to eschew cultivation in favour of mowing, replacing floral rows with regenerating grasses, while hatching a plan for year-round flocks of mowing sheep.

When Greystone was planted in 2004, it was characterised by a metre-wide “dead strip” under the vines with 1.5m of grass between, which, they “pounded, planted then mowed”, says Nick. That all changed in 2011, with the purchase of the neighbouring Muddy Water, a dry-farmed organic vineyard that inspired Greystone’s move to Biogro certification.

Nick leaped into researching and planting interrow crops that included tall bright blooms of buckwheat and phacelia, seeking biodiversity and beneficial insects, while replacing herbicide with cultivation. “Now we are starting to think more about what that cultivation does, whether it’s undervine or in the mid-row, in terms of wrecking the soil structure,” he says, lamenting carbon loss, and topsoil runoff on the hills. “At the time it was a step forwards, but it doesn’t mean we should stop challenging ourselves to do better.”

Viticulturist Mike Saunders says Greystone’s vines take up 50 hectares of a 180ha farm, so there’s plenty of biodiversity and beneficial insects already available. Planting every seventh row in flowers doesn’t have as much impact as “getting the whole farm right”, he adds. “If we don’t have a balanced vine, it doesn’t matter how pretty your vineyard looks and how many flowers you have got there.”

For the past 12 months he has been weeding out cultivation, starting with a hill block that was too side slopy for efficient machinery work. “It all came from a little bit of laziness to be honest… I thought, ‘what happens if we don’t weed it at all?’” He watched the undervine species “doing what they do”, with grasses coming through over broadleaf weeds like mallow, which are typically “stirred up with cultivation”. The grasses grew to a foot, seeded and fell over, and Mike and Nick are delighted to have evolved to a dry hill face dominated by annual grasses, “but that doesn’t mean it would be an awesome idea on a flat block of lucerne and chicory”, says the latter.

So they’re taking a bespoke approach to the blocks, with some still cultivated and planted in flowering cover crops, and this new block, with subsurface irrigation and a mixed grass sward undervine and mid-row. It was green cropped before planting, with lupins, tick-beans and oats as part of a seven species selection designed to mulch back into the soil. Next summer, they’ll plant a multi species crop. In the meantime, the irrigation and competition from the grasses mean the vines are digging deep, while the undervine growth helps conserve soil moisture, and the mid-row grasses are added to the vine row as mulch when mown.

“We didn’t know what would happen when we stopped cultivating,” Mike says. But the grasses came away, along with clover, chicory and plantain, “which we haven’t planted for years”. All three are good for the soil structure, bringing aeration and feeding the soil biology. “That is really exciting to see, and just another evolution in terms of what we are doing.”

The vines would be bigger if there was a “carefully manicured strip down the middle”, says Nick. “But do we have to focus entirely on speed of growth and everything at the expense of, what did it kill in the soil? What did it take to make that drum of Round Up? What are we going to have to do later on, in 20 years’ time, to fix these things?” He admits that in past viticultural roles he would have been embarrassed to see the “messy” rows, but relishes the change in attitude. “Back in the day there was only one plant that should be living in the vineyard – that’s the vines.”

Now, when planning their sward mix they think of the health and biodiversity of the soil, but also of the nutrient value for stock on top, with more sheep at work then ever before, and a plan to graze them all year round. Mike and Nick have been delving into new knowledge in the farming sector, including in regenerative agriculture, to understand “smart grazing technology” that can boost soil carbon.

Mike – blinkers well off - is considering a change to trellising that would keep tender tips above bite height, and make the vineyard an integrated facet of the full farm unit. “We are all farmers who have planted vines and become viticulturists, but that doesn’t mean we need to focus solely on vines.”

Nick says it’s a constant journey to get the best balance of vine, farm biodiversity and healthy soils. “It’s incredibly complex and you need to be passionate about it and prepared to dive in deep on a daily, weekly, monthly basis.” So the Greystone evolution continues, he says. “You can’t ever stop and tick the box and say ‘we’ve done it now’.”