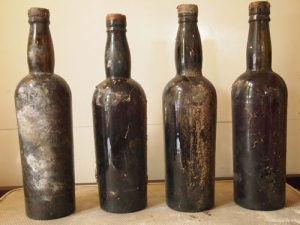 Century old wines are the stuff of dreams but this year two bottles became reality for a small group in the Wairarapa as Joelle Thomson discovered.

Children often dream of finding hidden treasure when playing hide 'n seek but William Beetham never gave a second thought to the dusty old bottles in the wine cellar where he hid from his siblings as a young boy – until this year, that is.

This year he finally tasted a drop of wine that is thought to be 113 years old and is one of a handful of bottles remaining from his ancestors' early Wairarapa winemaking at Brancepeth – once one of New Zealand's largest sheep farms.

Two bottles of wine from a shelf labelled '1903 Claret' were opened for tasting on February 9 for a small group of winemakers and media who visited the estate for the mid morning tasting.

"We knew the wine was special but we were unsure if it was still of any quality," says Beetham.

The tasting took place in the dining room at Brancepath. Two bottles were opened and poured without muslin or sieve filtering, so cork fragments were a factor to contend with. The first bottle was in surprisingly drinkable condition; held together by a framework of noticeably fresh acidity with pronounced flavours of red cherries, dried red fruit such as cranberries and secondary aromas of smoked mushrooms, truffles and earth; it showed intense complexity and a pale ruby colour, suggesting Pinot Noir, as did its red fruit aromas.

The second bottle tasted cork affected; it lacked freshness and tasted stale, devoid of the red fruit and clean earthy aromas of that first, remarkable bottle.

So, what prompted the opening of the 1903 bottle now?

"The wine community (John Saker, specifically) approached us requesting to run a tasting event. We were initially reluctant as we did not realise the importance or uniqueness of the wine. Once we understood the importance to the wine community, the opportunity to learn more about the wine and our history, plus the ability to recapture and continue another unique story of the people of Brancepeth, we agreed to the event," says Beetham.

He and his father, Edward Beetham, hosted the tasting at Brancepeth, which is where the story of this wine began at its remote rural location, east of Masterton.

Several bottles still remain housed in the dusty downstairs wine cellar, from which the two that were tasted this year also came from. The cellar is a relatively small room, given the relatively large size of the estate with its 36 rooms, separate stables and buildings from its busiest days in the past as a vast sheep station.

The old bottles are all unlabeled but have remained on shelves with a tag, which declares them to be: Claret 1903. This wine has been recorded by the family to have been produced by grapes grown by William Beetham and his French wife Hermance, who is thought to be the instigator of that early winemaking.

Despite the name 'Claret 1903' on the cellar tag, this wine is thought to have been made from Pinot Noir, Pinot Meunier and Syrah. There are no records of the percentage of these grapes that were planted in the vineyard; only that these varieties were planted there at the time.

Brancepeth Estate has been divided up many times since its heyday in the second half of the 1800s when it was one of New Zealand's largest farms with an original land holding of what I understand to be 34,000 hectares. Many of the property's facts are beyond dispute, including that it once had 300 staff and a library of thousands of books with a full time librarian who travelled around the extensive property to deliver them to workers.

The site of the original Beetham vineyard is now planted with grapes but is no longer owned
by the Beetham family. It is
called Lansdowne Vineyard and was planted in 2002. The first vintage was made in 2009 from grapes planted and tended by Derek Hagar snr and his late son, Derek Hagar jnr, who passed away in 2013; the night before harvesting began.

All of the Lansdowne Vineyard wines have been made by Wairarapa winemaker Karl Johner.