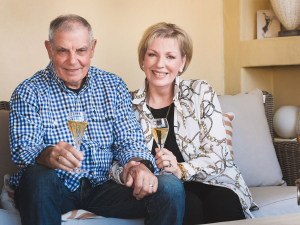 When Daniel Le Brun first visited Marlborough in 1978, he was "immediately convinced" the region had the potential for great wine.

Daniel hails from a long line of winemakers in the Champagne district in France, where his family has been growing grapes since 1684 and making Champagne since 1791. As a young Champagne maker, however, Daniel was frustrated with France's strict regulations and lack of opportunity, so made the decision to visit friends in New Zealand and check out the marketing scene down under.

He was less than impressed with the first New Zealand wine he tasted in Thames, but after hearing that Montana had planted three vineyard blocks in Marlborough, he travelled down in the summer of 1978. "I was immediately convinced this was the place to be. The soil and the climate reminded me of Champagne in the best vintage years, yet it happens every year here in Marlborough," Daniel says. "There was no winery infrastructure back then, just bare paddocks with almost desert-like conditions, not a blade of green grass to be seen, just a few dusty sheep and that was about it."

He set about collecting vine cuttings from vineyards in the North Island, sticking to what he knew from his homeland - Pinot Noir, Chardonnay and Pinot Meunier - the classic Champagne varieties. After selling some of his vineyards in Champagne, Daniel arrived in Marlborough in September 1980, followed in October by his wife Adele, four-month-old daughter Virginie, two dogs and 50,000 cuttings, which had to be put in cool storage until suitable land was found to plant.

The couple bought a site in Renwick for a winery (where Mahi is today) and 12 hectares along State Highway 6 for a vineyard. They then worked furiously to get the vines in the ground in time, says Adele, who remembers pushing baby Virginie along in the buggy in front of her as they worked. They began building the winery in 1983, something the Rural Bank was not so keen to provide capital for, Adele says. "They were very skeptical about grapes and the future of the wine industry in Marlborough."

With his traditional approach to viticulture and winemaking, including close planting, developing an underground cellar and planting varieties such as Chardonnay, Pinot Noir and Pinot Meunier, Daniel soon made a name for himself as the "mad Frenchman". He took on a second job, developing and managing vineyards for absentee owners, to earn some income while they waited for the day they could release their first wines.

That day finally came in 1985, when the Speaker of the House of Representatives and renowned wine buff, Jonathan Hunt, opened their first bottle of wine in the time honoured tradition of sabrage, in front of a party of over 200 guests.

The next challenge was convincing New Zealanders to buy $18 bottles of wine, rather than $3 bottles. "New Zealanders didn't drink much Champagne back then," Adele says. "After visiting the Champagne district in France and learning about the process and the time and work that goes into a bottle of Méthode Traditionelle, I realised we needed to educate people so they could understand the transition and process behind the wine and that what they were buying was a quality product."

That quality also spoke for itself. The first wine, a classic blend NV, was followed by the 1985 vintage Blanc de Blancs, which caught the eye of the top wine judge in the country. He implored people to "sell their dog and mortgage the house" to buy a case. Two days later they had sold all 1,000 cases.

This came despite a series of events that threatened to derail their business. On July 10 1985, just before the release of their first wine, the flagship of the Greenpeace fleet, Rainbow Warrior, was bombed by a branch of the French foreign intelligence service. As the only French winemaker in New Zealand at the time, the family faced a backlash, Adele says. "On a trip to Wellington on Bastille Day, we were called terrorists, a lasting memory for our daughter Virginie, who was five at the time. There were reports of people pouring Bollinger and other Champagnes down the drain in Auckland. The timing couldn't have been worse, but we managed to turn it around by calling our Méthode Traditionelle, 'New Zealand's Champagne', and encouraging people to buy it."

In the 1980s, times were tough after the radical economic reform and deregulation of Rogernomics caused mass unemployment and interest rates to rise up to 23 percent. At the same time, investors flooded the newly deregulated sharemarket and fortunes were made. Then on October 20, 1987, the Black Tuesday stock market crash changed everything. "From the economic downturn due to Rogernomics and the stock market crash in 1987, to phylloxera and the global financial crisis in 2009, we've dealt with many outside forces that have put the business in jeopardy," Adele says. "We are now facing the coronavirus pandemic and are fortunate to have our past learnings to draw on."

The family business has been through some financially shaky times, down to 30 percent ownership at one point after having to sell shares in the business to free up capital. In 1987 they formed a partnership with Regal Salmon and its managing director at the time, Terry Shagin, who remains a dear friend to this day, Adele says. "We have worked our way back up and No.1 Family Estate is 100 percent family owned, which is something we're very proud of."

There have been some massive highlights over the past 40 years as well. Daniel was recognised by the French Government for his diplomacy work in helping to restore French-New Zealand relations after the bombing of the Rainbow Warrior, for which he was awarded the New Zealand equivalent of a knighthood, the Chevalier Order of Merit for services to France in 1997. In 2006 he was awarded the Chevalier order of Agricole, for services to viticulture.

The original wine branc Daniel Le Brun was sold in 1996 and is now owned by Lion Nathan. Launched on Bastille Day 1999, the family established its current brand, No 1 Family Estate, in recognition of the many 'firsts' in New Zealand wine they have achieved.

This story ran in Winepress in December 2020 and is republished with permission from Wine Marlborough.

A few months after landing in New Zealand in 1985, Rudi Bauer felt disconnected and alone, homesick for the culture of Austria.

Andy Frost has spent nearly 40 years weaving science and research into the practical business of growing and making wine, with groundbreaking consequences for the wine industry.

NZW'S 2021 Fellows: John Clarke - for service to NZW and NZGGC

Driving a tractor up and down a vineyard gives you plenty of time to think, says Gisborne grape grower John Clarke, who's put that time to good use during 30 years of governance.