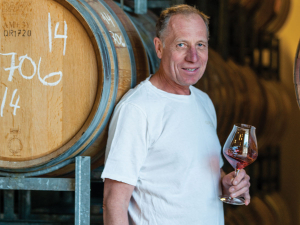 A few months after landing in New Zealand in 1985, Rudi Bauer felt disconnected and alone, homesick for the culture of Austria.

But after a period of "whinging and whining", the 25-year-old winemaker decided it was his responsibility to adapt, and to offer "new thinking" to New Zealand's wine story. "You have the choice of, 'dig yourself a hole and go home', or 'be part of creating history'."

Nearly four decades on, the founder of Quartz Reef has made an extraordinary contribution to his adopted nation, having pioneered the Bendigo subregion, helped forge a reputation for Central Otago wines, and nurtured conversations about Pinot Noir, Central Otago, organic viticulture, and the place of winegrowing in New Zealand culture.

Rudi grew up with a farming family outside of Salzburg, and moved to wine country outside Vienna when he was 15. He considered horticulture, viticulture, floriculture and market gardening as career options, and - luckily for New Zealand and its Pinot Noir - chose wine.

When he arrived at Mission Estate in 1985, New Zealand's modern wine story was just beginning with its Sauvignon Blanc "discovered" in the United Kingdom, along with producers like Hunter's and Cloudy Bay. "So, I was really just lucky enough to be at the beginning of New Zealand in this extraordinary growing phase," he says.

A six month job at Mission extended to four years as assistant winemaker, interspersed with vintages in California and Oregon, which whet his appetite for Pinot production. In 1989, Rudi moved to Central Otago to work with Rolfe Mills at Rippon Vineyard, one of just six wineries across the region back then, "and I effectively grew up with the community," he says. In 199 he helped Rolfe transition Rippon to organics, and in 1991 made the region’s first gold and trophy Pinot Noir./p>

The same year, Rudi and his wife Suellen Boag found a hillside paddock on Bendigo Station, in an area once hallowed for the gold-bearing quartz reef that would give their wine its name. In the years since, Bendigo has “grown tremendously” and is now deemed an important subregion, responsible for a quarter of Central’s production. But back then there was nothing planted in the Cromwell Basin, “there was no Lake Dunstan yet, and I could visualise this land to be one day a vineyard,” Rudi says. He was inspired by 15 hectares of steep slope running in one north-facing stretch, “which you don’t see that often,” and could see the “end goal” of Quartz Reef, “but how to get there, I didn’t know.”

He formed a partnership with John and Heather Perriam of Bendigo Station and Champagne-raised Clothilde Chauvet, then delved into the detail, working to understand the soils (arid clay, fine gravel and quartz) and find water, then bring in 2km of power to access it. “Then the question of what variety? What rootstock? That all followed through after the first impulse.” The further they got in, the further he realised that this land “ticked the boxes and the action got clearer.”

Rudi didn’t want to be blinkered by experience, so took his learnings from vintages in Austria, Germany, France, California and Oregon, and adapted them to the unique soils and climate of the site. “Not to copy something, but in actual fact to translate what it means for that land in Bendigo,” he says, comparing the philosophy to his own adaption – and translation - to New Zealand.

He was Winemaker at Giesen Estate in North Canterbury from 1993 to 1997, and in 1998 started planting Quartz Reef, with the first harvest in 2001. By 2004 the vineyard had expanded to 30ha, “which was not the plan,” says Rudi. But the more he learned about the property the more it gave. He is still learning, with the vineyard site much better than he ever expected, and also far more complicated. “There is still a lot to be understood to really express what I call the best definition of Pinot in your class.”

From the start, Rudi wanted a “plan B”, with Pinot Noir unproven in the region, so he leaned on the variety’s “flexibility” to make a safety net of Sparkling Wine, calling on expertise from Clothilde, and from winemaker James Healy, then at Cloudy Bay. A few decades on, Quartz Reef’s Sparkling Wines are far more than a B-Plan, as the largest premium producer of hand-crafted organic and biodynamic Méthode Traditionnelle in New Zealand.

He’s also been a voice for organics since 2007, when Quartz Reef became biodynamic, after several years of planning. “It is a challenging, difficult site and I was very scared I would fail, so it took me a long time to make the call.” Weed control on the rocky steep site is still the biggest challenge, but the decision was the right one, he says, talking of a landowner’s responsibility to look after the land, “in the small lifespan we have,” and improving soil quality and soil health in order to pass it on to the next generation in better shape. It was also the best call for the wines, with Pinot Noir served better by a biodynamic philosophy, Rudi says. “I get a far more distinctive definition of a Quartz Reef single site Pinot in the glass.”

The region’s wine industry is now a balance between the pioneers, who started at 25 and are now in their 60s, and “the young ones” stepping up. “I think generational change is now in motion,” Rudi notes, with many senior winemakers ensuring they “pass on the torch” to the next generation. “Not only leading from an environmental and organic point of view, but from a quality point of view.”

Meanwhile, Central Otago’s portfolio is getting stronger, with Chardonnay garnering more attention, and Riesling, Sparkling Wine, Grüner Veltliner, Pinot Blanc and Pinot Gris increasingly important. “The menu is getting bigger which is kind of nice,” Rudi says, noting that each producer is growing their understanding of what works best for them. “That makes the tapestry more colourful.”

When Daniel Le Brun first visited Marlborough in 1978, he was "immediately convinced" the region had the potential for great wine.

Andy Frost has spent nearly 40 years weaving science and research into the practical business of growing and making wine, with groundbreaking consequences for the wine industry.

NZW'S 2021 Fellows: John Clarke - for service to NZW and NZGGC

Driving a tractor up and down a vineyard gives you plenty of time to think, says Gisborne grape grower John Clarke, who's put that time to good use during 30 years of governance.