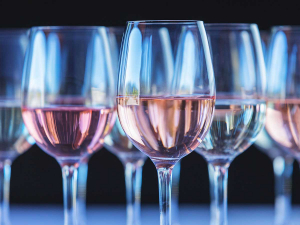 “That’s why it’s so important to do trials - so we can know what we can achieve.” Patricia was one of the speakers at November’s New Zealand Society for Viticulture and Oenology (NZSVO) Rosé Workshop in Marlborough, fittingly titled Smell the Rosés.

And smell them they did, with 95 industry members from around the country hearing about new happenings in vineyards, wineries, markets and research labs, while tasting Rosés from New Zealand and beyond.

NZSVO Executive Officer Stephanie McIntyre says the event sold out faster than anticipated, partly because the world has such a thirst for Rosé, and also because this was one of the first industry events to be held since Covid-19 first shook the country. “Obviously everyone is keen to get back into that industry share, which I think is critical to the success of New Zealand’s wine industry.”

Clive Weston of Negociants spoke to the workshop about the global Rosé market, including “what makes Rosé so hot right now”. Clive says with a multitude of styles across a spread of price points, Rosé is set to continue its stellar rise. New Zealand wine export statistics from the past five years show it has overtaken Chardonnay in terms of exports sales “and is just a fraction behind Pinot Gris”.

That growth in numbers made the workshop topic an easy call, says NZSVO President Jeff Sinnott. “It is obvious that this thing is taking off, whether you like it or not.” The rise of Rosé has been “truly consumer driven” says Jeff. “Generally speaking, it’s not really a winemaker’s wine… That’s what makes it so exciting because it’s so customer-centric.” And in a world where wine is competing with beer and other beverages, companies need to listen to the consumer. “That’s probably the next generation’s challenge - to keep this as the beverage of choice.”

Wielding a squat 750ml bottle of Round Theory Rosé – certified vegan, in a lightweight bottle, with double its carbon emissions offset – Jeff notes that in the Rosé category, what’s outside the bottle is as important as what it contains. “They are both equally critical,” he explains, noting that the workshop touched on consumer and market perception, “not just straight up winemaking”. That includes adapting to “modern concerns”, Jeff says. “It’s really about figuring out who they are, where they are and what they like, and what they are prepared to pay for it.”

Round Theory is one of Constellation’s Rosé range. Another is “State of Light” which includes a zero alcohol option, with alcohol removed using the Spinning Cone technology introduced to New Zealand late last year. Its 7 percent Rosé also utilises that technology, but is blended back with a portion of the original wine.

Selaks Head Winemaker Brett Fullerton spoke to the workshop about the importance of Rosé to the company, with the Kim Crawford Rosé the largest wine blend made at Constellation’s Hawke’s Bay winery. That wine is the second priority for Kim Crawford in the US, after Sauvignon Blanc, he added. It may always be the bridesmaid, but “we have seen huge growth for Rosé for our parent company”.

Brett talked of the product development behind Selaks’ three new Rosé wines, in a session on “finding your value proposition”. Speaking of the zero alcohol and lighter alcohol options, as well as the standard alcohol Round Theory, with its multitude of social licence features, he explained the need for a total package. In a sea of pink, he told the audience they need to think about what will make a consumer pick up their wine.

The event included three international speakers, via Zoom, with Glen and Kirsten Creasy, from Sabrosia in France, on a French take on styling Rosé – including the colour of Provençal Rosé, and a viticultural perspective on characterising critical points in Rosé production. Jiaming Wang from Labstat in Canada spoke of the chemical and sensory profiles of Rosé, and looked at opportunities to meet Rosé expectations in the China market.

Bragato Research Institute Research Winery Manager Tanya Rutan, who has conducted a Rosé trial at the winery and co-hosted one of the tasting panels at the event, says in the past Rosé was something winemakers made on the side with grapes they had no use for. “Now they’re seeking out some of their best fruit for the wines.” Tanya compares Rosé to Chardonnay, because the winemaker can show their personality through the diversity of styles. “And the market loves it.”

Innovations in Rosé production were a key aspect of the workshop, with a series of presentations on trials into fermentation options, whole berry inclusion and nutrients. They included Patricia’s presentation on trials into the impact of antioxidant Glutastar in comparison to OptiMum White in Pinot Noir Rosé, and work on the impact of Stimula white nutrients to improve aroma and flavour of low alcohol Rosé.

Patricia says the various Rosé trials are fascinating, because consumers are driving the category. “There are so many different styles on the table and people don’t all know yet exactly what they know or they like. In New Zealand we have just scratched the surface of what we can do and what we can achieve.”

Light on their feet

Where now with Organic Focus vineyards?

Back in 2011, an ambitious three-year project began, looking at what it took, cost and involved to turn a vineyard from conventional to organic.

Reds and rosés get chance to compete

Last year Wendy Stuckey was named as one of the 20 most admired winemakers in North America.