The insurance cost for our wine industry post-quake 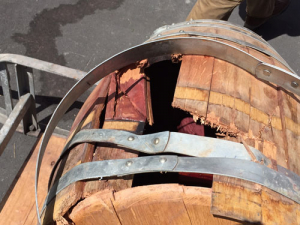 “It is becoming clear that how finished and barrelled stock is stored requires some greater risk management in terms of pallet height and securing of racking,” Dan Szegota says.

Following the November 2016 Kaikoura earthquake many similar issues to the 2013 Seddon earthquake have re-occurred.

However some additional issues and learnings can be taken from the most recent one, despite assessments, engineering reports and loss assessor reports for larger claims still in a state of flux.

What is initially clear, in respect of wine industry losses, is that this event is not a large or unmanageable situation and the flow on effect to reinsurers will be relatively minor. However the wider non wine industry losses to the Wellington region is a much bigger issue which could highlight the region and bring it more into focus from an underwriting perspective with tighter controls such as earthquake pricing and policy excess structures.

The current insured losses estimate of around $200-$250m to the wine industry, is a reserve, based on immediate and apparent damage to tank farm infrastructure and barrelled/finished stock both at wineries and contract warehouse facilities. It excludes Business Interruption losses as the impact of any inability to process Vintage 17 (V17) is not yet known.

Although the epicentre was located further away than the 2013 Seddon earthquake, the November event was more severe, damage more widespread and therefore the cost to insurers is far higher. Many similar losses to the 2013 event were apparent, including tank and catwalk damage - although it should be noted that those tanks put on plinths following the 2013 earthquake performed better than those still on legs. Finished stock and barrel damage losses are substantially higher than 2013.

Another reason that the losses to insurers have increased is the recently reduced earthquake excess – typically reduced from 5 percent to 2.5 percent a few months pre earthquake. When this percentage is worked to a dollar value, this lower 2.5 percent excess still results in a high cost to the winery but also a higher claim cost to the insurer.

Despite the current site excess structure being in force for a number of years there is still a lack of understanding around how this is applied and the actual dollar value excess applied to a loss. This is an area that wineries should calculate with the help of their broker to understand the residual risk that lies within the business that needs managing following any earthquake loss.

The one issue that is of more concern to insurers (and the industry alike) due to its unknown nature, is the impact of processing availability for V17. Many wineries were quick to get tanks ordered and have a temporary solution up and running with insurers making progress payments to help minimise their loss, but also give the insured the ability to maintain markets next year – more formal repairs can then progress post vintage.

Those that use contract facilities are at the mercy of those facilities getting repaired and, if they can, they may only have a limited capacity resulting in no capacity to produce for all existing clients or increased costs incurred having the wine made elsewhere. Insurance policies are able to pick up these increased costs fairly easily if cover was purchased and an insured loss occurred.

The insured losses for an inability to process V17 are also hard to quantify at this stage due to vintage size being an unknown and policy wordings that differ greatly in terms of how they trigger, and the basis of settlement. These costs will become more apparent in the coming months. However initial indications are good due to a pro-active approach from the outset by the industry and insurers alike.

Finished stock losses at contract warehouses are the easiest to quantify and many of these have now been settled and finalised. It is becoming clear that how finished and barrelled stock is stored requires some greater risk management in terms of pallet height and securing of racking.

Some underinsurance issues at these locations also became apparent mainly due to a lack of knowledge of exact stock holdings at warehousing locations which is an area that wineries should look at in more detail going forward to ensure they have the correct cover at each location they process or store wine stock.

As alluded to previously, I would expect the currently known size and nature of this event to impact on underwriting controls only, rather than those insurers that currently write wineries moving away from the industry. Pricing may increase slightly but the more likely scenario is a return to 5% site excesses.

This will put greater emphasis on a winery’s own risk management if they are to withstand future events, financially manage losses that are under excess and gear up for the longer term.

Following two large events in three years insurers will be expecting a proactive approach from the industry and tank manufacturers alike to help mitigate these losses.

Naturally there is no good time for an earthquake, however the timing of both the Seddon and Kaikoura earthquakes resulted in relatively minor bulk wine losses from tank and enough time to at least get most processing capacity back for the upcoming vintage.