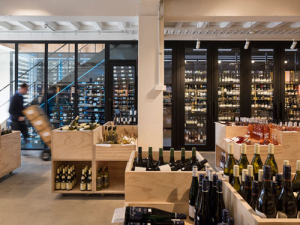 The new Caro Wines in Ponsonby.

Auckland retailer Kingsley Wood opened the doors of his wine store, First Glass, 17 years ago in Huron Street, Takapuna and moved for the first time six months ago when 50 of his regular customers turned up as volunteers.

“I just said ‘I need help’ and it was very nice to have people come along and do that – and we broke one bottle. It was amazing. We did it all in about four hours, moving from Huron Street to our new premises, just round the corner.”

The customer base he has built up over the past two decades is extremely loyal, he says, because he is honest with them about pricing, discounts and availability.

“We have to front up to them if they ask us to recommend a wine and then they like or don’t like it, so we have to be honest every step of the way. If the supermarket has a wine for a cheaper price then we need to provide another point of difference by supplying better wines at lower prices or wines that people may not easily be able to find, which are good in different ways.”

High volume sales are also key to successful small businesses. This was one of the main reasons he moved his store’s location this year. The new premises offered him an increase in carparks from eight (at the old store) to 14 (at the new one) – as well as a longer lease, which was an appealing drawcard.

“When competition is tough, you have to move forward. A lot of people forget about the wait factor for customers when they’ve got a nice little wine shop with one or two carparks, which means most people can only walk in and buy the one or two bottles that they are able to carry out. Carparks mean people can buy wine by the case.”

The biggest challenge that Wood faces right now is the seasonal price erosion of Champagne, due to high volume sales in large competitive retail stores - grocery.

“Nobody makes any money on Champagne these days because you’re getting margins down to as low as 6% to 7% and it’s just ridiculous that we all go out and kill each other on pricing, which is driven by the supermarkets who usually demand they get their way or otherwise bring in parallel imports.”

Caro suggests that supermarkets are killing other categories of wine sales too, but says that Champagne is more strongly brand driven than many other wines.

“New Zealanders have not generally tended to get into grower Champagnes yet, which is a real shame because that’s where some of the best quality and greatest value can be found. It’s like the craft beer movement which has helped diversify people’s taste buds and spending. When it comes to Champagne, it’s the small grower brands that offer the best value and flavour. They will have their day in this country but right now, most people are totally seduced by the big brands and that’s that.”

The heavy price cuts that affect Champagne is the tip of a far deeper trend that Wood describes as disturbing discounting.

“What disturbs me most in wine retail today is what I see as a fabrication of reality, of the truth, in terms of discounted wine prices. This is apparent from a number of significant wine retailers who suggest that their prices offer a great discount. It’s convincing for some people but those of us who know better look with some despair at how the public are being manipulated,” Wood says.

He objects to discounting that appears to convince members of the public they are getting a better deal than they actually are, by way of prices which are not actually as significantly reduced as their advertising may suggest.

“If you see a wine that is supposedly reduced by a certain amount, but it never – or rarely ever – sells for its recommended retail price, it makes a mockery of the truth,” says Wood.

So, how does an independent wine retailer make stiff competition and narrow margins work profitably?

“Wine margins are so skinny that it’s about managing stock levels and making sure you deliver quality and value to your customers,” John Caro says. “It also helps that the imported wines at Caro’s are all exclusive and cannot be found anywhere else because we bring them in. This gives us a point of difference without pigeon holing us. People can come into our shop and pretty much get wine from any country because there’s nothing we don’t deal in. We are a general specialist.” (Caro imports are sold to other independent retailers in the South Island, such as Vino Fino and Decant, both in Christchurch).

It is a general specialist that doubled six months ago when Caro senior (the father of John and Richard Caro) retired from his clothing factory business, leaving behind a central Ponsonby premise with space for his sons to set up a second store.

“We also knew we had customers on the other side of Auckland and nobody wants to drive in this city, so we took the plunge because the premises were there. We pay rent but the timing and logistics were made possible in a way that never could have happened otherwise. It enables us to spread the sales risk in a large market, even if we are surrounded literally by wine stores in nearby streets.”

It’s still early days for the new Caro’s Wine store in Ponsonby but with central Auckland’s swift population densification, there is significant growth in apartments nearby, which can potentially mean significant customer growth.

The location also offers direct access to another part of the market - restaurants to which Caro’s supplies wine. This is also an important part of business at Regional Wines & Spirits in Wellington where trade sales can help the viability of an otherwise small wine business.

“I don’t think that any one particular channel of sales would be a viable business for us but all of them together make for a good business – trade sales and online as well as retail,” says Henderson, adding that he is not reliant on banks or a head office to tell him how to sell and what to sell. “I hear so many times that wine stores will have a ‘core range’ or recommended portfolio which they have to stock. This means that all of a sudden someone else is dictating your business, not the customer. That’s not what we’re about.

“We want to enhance the experience for the customer and take it to another level for them by having staff with specialist knowledge who are able to relate to customers and guide them towards positive experiences,” Henderson says.

Another challenge in wine retail today is the more specific lack of big, rich styles of Chardonnay, which are in short supply. Wood finds this one of his biggest frustrations.

“When I run a competition like the New Zealand International Wine Show, it’s full of winemakers – absolute legends of the Kiwi wine industry – who drink those styles but don’t make them. It’s just unbelievable that they won’t make the big Chardonnays that my customers want to drink.”