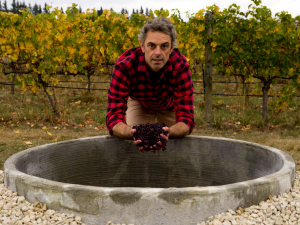 Dom Maxwell with the concrete fermenter Greystone has been using for the past three years. Photo by Richard Brimer.

“It may be hectic in the winery, but out there it’s super tranquil,” says Greystone’s Winemaker, describing bare vines, a few birds, and a small vineyard fermenter at work.

The wines made on this Waipara hillside come care of handpicked grapes destemmed in the vines, ambient yeasts unique to the hillside, and the heat, cold and wind that play a “massive” role in the ferment. “What we love about that is it really extends that seasonal influence,” says Dom, talking of imprinting on the wine a unique fingerprint of the land, season and fruit.

Inside the winery, the ferments carry an unmuffled story of place and season too, with native yeasts, low intervention and a seasonal variation the Greystone team relishes. In a world with “millions of wines, and most of them pretty good”, the expression of place is fundamental to the long term sustainability of the business, Dom says. “If we are going to all the effort of planting on the side of a hill and farming organically, and wanting to do this the right way, then surely that should come through in the wines as well.”

The concept of natural wines may be “hazy”, and 10 different people will give 10 different answers, says Dom. But whether it’s a vineyard ferment, an orange wine, or a sulphur free Pinot Noir, it’s about letting the “integral beauty of the grapes come through for the place”, he says. “Most people would agree that the best way to show that true beauty of really, really great grapes is to do as littleas possible.”

Wine lovers can thank the dull back office of a London recruitment firm for Greystone’s vineyard ferments, because it convinced Dom his commerce and management degree might not be the best fit. “A little wine flame” had been ignited in London, so he left the back office and returned to Lincoln University for a post graduate winemaking course, before taking a role at Greystone in 2004, when it was “basically a farm with a few wines in the ground".

Fast forward to 2021 and Greystone is a vineyard of high acclaim, winning Raymond Chan’s New Zealand Winery of the Year in 2018, when Dom also won Gourmet Traveller New Zealand Winemaker of the Year. He says the success is thanks to a committed team and “constant conversations about how we can make the place better, make better wines and have a story that can almost tell itself”.

Those conversations led to the first vineyard ferment in 2012, and have seen the process evolve year on year, as they learn about the site and its native yeasts. To begin with, they treated the ferment as they would Pinot Noir inside the winery, Dom says. “Then we thought maybe we should back off a little and let the site speak.” The results were so compelling that lessons from the vineyard ferment were taken inside the winery walls.

Inside and out, the hands-off process means the “fingerprint” of season and site will be different from year to year, “and that’s something you have to be comfortable with”, says Dom. “Not just the winemaker, but the marketing team. It’s down to ‘that’s what the season gave us’.”

New Zealand winemakers are increasingly confident about embracing vintage vagaries in their wines. “If you are going with a more hands-off approach you are always getting a bit more of a complex style, and you really can allow the season to speak in a more comfortable way. We want to tell that story.”