Winning the war? BMSB in Georgia 2019 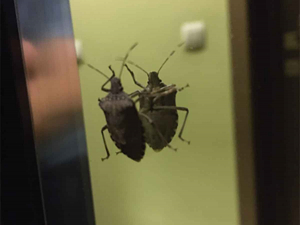 A BMSB crawls up a mirror in the hotel room.

New Zealand Winegrowers (NZW) was part of a small delegation that recently visited the beautiful country of Georgia, in the Caucasus region between Europe and Asia.

Wine is intrinsically woven throughout the Georgian culture, with historical evidence of wine-making dating back to 6000 BC.  In the capital city Tbilisi, the statue Kartlis Deda (Mother of Georgia) holds a bowl of wine in one hand, to welcome her guests; in the other is a sword for those who come as enemies.  Many winemakers still use qvevri, large clay pots for underground fermentation and storage of wine.  Grape marc is used to make chacha, an eye-wateringly strong distillate taken as a shot with lunch, and grape juice left over after harvest is mixed with flour and walnuts to create the Georgian candy, churchkhela.

The Georgians pride themselves on hospitality and were the ultimate hosts, ensuring that amongst a packed work itinerary, we were able to enjoy some of the unique historical sites and cultural experiences on offer.  The National Wine Museum was well worth a visit, as was the 6th century monastery of Jvari, the eastern hilltop village and markets of Sighnaghi, and the popular port city of Batumi on the Black Sea coast.  However, this charming tourist experience contrasts sharply with the recent experience of the local population in western Georgia, where a brown marmorated stink bug (BMSB) invasion has been wreaking havoc since 2016.

The situation in Georgia

“Georgia has been plagued by this pest for three years now.  We just want it to be over, so that we might once again have time to focus on other important issues for our country.”  Georgian Deputy Minister for Agriculture, Giorgi Khanishvili

BMSB was an unknown entity to Georgia when it first arrived three and a half years ago, most likely via Abkhazia, an autonomous region under Soviet control. Western Georgia must have seemed like paradise for arriving BMSB.  An agricultural region with low pest and disease pressure, farmers traditionally did not need to use chemical controls and so there were thousands of hectares of hazelnuts, corn, soybeans and citrus for BMSB to feed on.  BMSB populations exploded.  Crops were devastated, and it was a wetter than average season to boot – BMSB damage increased susceptibility to fungal and bacterial disease.  Most farmers are not wealthy, having small holdings of only one or two hectares, and they rely on their crops both for income and to feed their families.  After a disastrous harvest in 2016, they turned to the government for help.

USAid, already working with the Georgians on sustainable agricultural programmes at the time, were able to link them with US and Italian experts working on BMSB control.  These scientists provided recommendations for a state control programme, which the Georgian government implemented in 2017.  2019 is the third year of the programme and the cost for this season is estimated to come in at $20 million USD.

Monitoring - setting up sticky traps to collect comprehensive data about BMSB population levels across the entire country.  These are regularly checked between March and October, and information is fed into a database the enable program co-ordinators to prioritise areas for treatment.

Management - the use of pesticides, specifically bifenthrin and deltamethrin, to control and reduce BMSB numbers.  Pheromone lures are used to draw BMSB to sites that can then be sprayed with insecticide to kill them in large numbers.  Heavily infested villages are thermo-fogged with deltamethrin at night.

Public awareness – active communication to the Georgian population, from government right down to individual farmers.  Local councils, medical professionals, plant pathologists, industry and growers’ associations, and schools are all involved in the communication of information. Mainstream media coverage and social media campaigns are ongoing.

Scientific research – looking for biological control options, such as parasitoids and bio-organic pesticides, which would prevent the need for use of hard chemistry.

Three years after BMSB arrived in Georgia, the news seems positive.  Early indications this season are that BMSB numbers have reduced by as much as 30%.  Farmers who are making use of the pesticides provided are seeing much less damage to their crops; those who haven’t been using them are swiftly getting on board.  So far, BMSB have not spread in large numbers to the eastern regions, where most vineyards are located and where other pesticide programmes are already well-established.  The government hopes to be able to leave BMSB control solely in the hands of the farmers within the next few years.  It is clear however that a labour-intensive, heavy pesticide programme and the current costs of management are not sustainable long-term, nor desirable; there is a real need for cost-effective, user-friendly and environmentally sustainable alternatives in the ongoing war against BMSB.

Biosecurity New Zealand has recently released new rules for the importation of vehicles, machinery, equipment and sea containers, designed to keep BMSB out of New Zealand.  If coming from high-risk countries, this cargo must now be treated offshore before arrival in New Zealand.  The list of high-risk countries has also been extended.  NZW made a submission in support of these measures.  The updated Import Health Standards can be found at https://www.biosecurity.govt.nz/law-and-policy/requirements/ihs-import-health-standards/.

NZW chairs the Brown Marmorated Stink Bug Council. The Council is made up of MPI and other industry organisations that have signed the Brown Marmorated Stink Bug Operational Agreement and is focussed on improving New Zealand’s readiness for this most unwanted pest.  In August the Council is meeting to plan the 2019/20 work programme. It is highly likely that this work will build on what has been learned through the trip to Georgia and focus on improving our potential to look for and eradicate this pest prior to it becoming established.

BMSB is not present in New Zealand.  If you think you see BMSB or anything else unusual in the vineyard,

Catch It; Snap It; and Report It to the Biosecurity NZ hotline on 0800 80 99 66, and get in touch with the NZW Biosecurity team (This email address is being protected from spambots. You need JavaScript enabled to view it.).