Zero Interest: The booming business of no alcohol 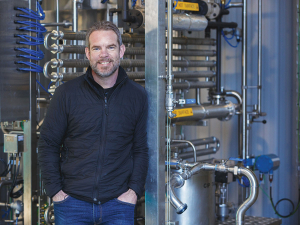 Taking the alcohol out of wine is proving good business for Giesen Group, with an expanding range of zero percent wines and forecasts of stellar growth.

“No-alcohol wines have to be made fresh, blended fresh and bottled fresh,” says Duncan. “Having our own unit means we can do that - if we’re producing 0 percent Sauvignon Blanc one week, then we are bottling it within a few days. This lets us capture aroma in the bottle and produce wines with more varietal character.”

The group is also exploring ways to utilise the alcohol removed from the wine, with plans to launch a first-of-its-kind product later this year, says Duncan.

The cone distills base wine into three layers – aroma, body and alcohol – before the first two are combined again, to create wine that lacks alcohol but retains as many recognisable characteristics as possible.

The company has also just launched a 0% Pinot Gris and 0% Rosé in New Zealand, taking its tally of low and no alcohol products to nine. “We’re learning all the time,” says Duncan. “Now that we have our own spinning cone, we’ll be able to trial a variety of techniques to further improve the blend. It allows us to refine and innovate across our products. We’re seeing better and better wines every time we produce them.”

International research predicts that global sales of no and low alcohol sales are set to increase 31 percent by 2024, valued at more than $1.6 billion, according to the No and low alcohol study 2021. Duncan says the trend is taking off overseas, with new alcoholfree bars opening in the likes of Melbourne and Colorado, “both stocking Giesen 0% wine”.

He says the market shift is fascinating. “We thought initially the market for these products would be health and wellness fanatics, but it’s actually much wider than that. It’s wine drinking consumers who want to be able to drink it without alcohol on occasion - such as when they need to drive or don’t want the after-effects of alcohol.”

Giesen Wines was part of the seven-year New Zealand Lighter Wines Research programme, which concluded this year. The $17 million programme - the largest in New Zealand wine's history - began in March 2014, with $8.13m from the Primary Growth Partnership, $8.84m of industry funding, in cash and in-kind support, from 18 participating wine companies. In the seven years since, it has involved research into market access, sensory perception, vineyard and winery manipulations, and the transfer of learnings to industry, all the while growing the category of New Zealand Lighter Wine.

Giesen has added a no alcohol Merlot and Riesling to its 0% alcohol range, following a huge amount of consumer feedback, says Group Chief Winemaker Duncan Shouler.