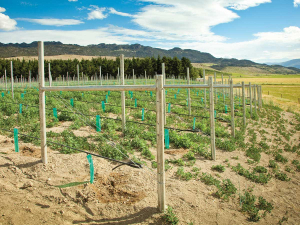 ECO TRELIS in place at a new Peregrine vineyard.

A company that is changing the face of vineyards here in New Zealand has just recently taken out the Supreme Awards at the Wellington Gold Awards and the Global Gold Award for exports.

NZ Tube Mills which produce ECO TRELLIS fought off stiff competition from 60 other finalists, with their innovation and global success gaining high praise.

“A couple of our engineers were driving through Gimblett Gravels and saw someone unloading a truck load of timber vineyard posts. They asked the guy what he was doing and he told them he was tired of breaking these posts every year. That was how it started. It was the idea of creating a replacement post concept.”

Since then the ECO TRELLIS system has morphed into a multimillion dollar business.

Given that treated timber posts have a breakage rate of anywhere from five to eight percent a year, and can’t be recycled due to the chemicals used to treat them, the steel alternative quickly caught the attention of growers and companies throughout New Zealand and Australia. Carter says unless a steel post is driven into directly and knocked over, they are basically impervious to damage from harvesters – unlike their timber counterparts. They are quick to install, around 3000 posts a day compared with 1000 for timber and have no potential leachate from CCA treatment. Companies such as Pernod Ricard, Villa Maria, Felton Road and many others have already adopted policies to replace all broken timber posts with steel and in Pernod’s case all new developments will involve ECO TRELLIS.

Having made significant inroads into the Australasian market, Carter says they began looking to the Northern Hemisphere, mainly the US in 2015. But it wasn’t quite as easy as he had hoped, initially anyway.

“We assumed it would be a timber market like Australasia, but they had changed to steel 30 years ago. So there were already lots of steel trellising alternatives over there.

“Then when we visited companies, they would ask us who we were already selling to in America and we had to say we haven’t sold to anyone yet.”
That was 2015. Now ECO TRELLIS is selling their products to some of the big names, including Gallo and Constellation.

“So that’s the number one and number three brands over there. Immediately we gained credibility.”

Given there was a plethora of steel trellising systems already available in the US, Carter says having a collaboration with New Zealand Trade and Enterprise and Klima stripping machines have helped create a point of difference. Klima offers something that is not available in the US - mechanisation. (See next story.) But to be able to use it successfully, NZ Tube Mills had to create a way of retro-fitting current trellis systems to ensure wires weren’t broken during the stripping process. Enter the Eco Sleeve, which literally clips on to whatever trellis system the vineyard currently has. Three million have been made in the past 12 months, helping the export sales of the company soar from $3.5 million in 2015 to $10 million last year. While the wine industry is their major market for steel trellising, Carter says they have also developed trellising for kiwifruit, apples, pip fruit and berries. And more is yet to come.