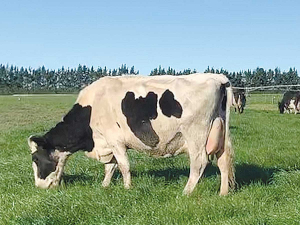 Belbrook Dynamic Vanessa EX5, owned by Belbrook Holsteins in Rangiora, has been classified excellent for a fifth time.

The result propels her into an elite club of bovines who have been recognised for their superior traits and longevity.

Vanessa was the only Holstein Friesian in New Zealand to receive an EX5 classification in 2019.

The achievement has left her owners, brothers Robbie and John Wakelin, elated.

“It’s been two decades since we’ve had a cow classify EX5, that was Belbrook LD Annabel EX5 in 2000,” said John.

A Holstein Friesian cow is not eligible to receive her first excellent classification until she has calved at least three times.

“Vanessa is a very youthful-looking cow. She looks like a nine-year-old, even though she’s much older,” said John.

“Vanessa is the smallest cow in our herd. She goes back to a different time when our cows weren’t as big,” said John

She classified excellent for the first time in 2009.

The bovine beauty has produced 13 calves. Five of her heifers were reared. Two of her daughters, Belbrook TKO Veronica EX2 and Belbrook Talent Victoria EX2, have both classified excellent twice.

Her youngest daughter, Belbrook Bankroll Viva VG88, who was born in 2016, produced 449 kgMS as a two-year-old heifer.

“Vanessa was the last cow we had in the ‘V’ family for about five or six years,” said John. “We thought we were going to lose the family, then she started having daughters and the family rebuilt.

“The ‘V’ family has never been outstanding for production, but they’ve been easy to work with and live a long time,” said John.

Longevity is a trait found on both sides of Vanessa’s family tree.

Vanessa was sired by Bellview WM Dynamic, a bull bred by Robbie and John before they took over their parents’ stud name.

“He was an outstanding bull. He produced about 17 daughters who classified excellent,” said John.

The bull’s dam Cresslands Ambition Dalia EX4 was still milking at the age of 15 and was classified excellent four times.

The ‘V’ family at Belbrook Holsteins will continue to expand.

Twin granddaughters sired by Walnutlawn Solomon are set to enter the herd this year.