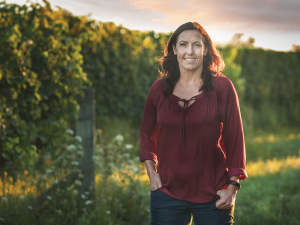 A pledge made in good faith (there is no compliance element involved), it provides a framework for businesses to ensure biosecurity is a core part of their operational activities and connects partners as a network to enable greater collaboration and learning.

Pernod Ricard Winemakers recently signed the pledge and are the first wine company to get on board. The New Zealand Winegrowers (NZW) biosecurity team spoke with Tracey Marshall, Pernod Ricard’s New Zealand Sustainability Manager, to find out more about why they have decided to sign up to the pledge and what it means for the business.

Why did Pernod Ricard Winemakers decide to sign the pledge?

“It was a no-brainer,” says Tracey, who first saw an article about the pledge on nzwine.co.nz. It caught her eye because at the time Pernod Ricard was updating its transitional facility operating manual, and the business had been through some changes which meant they were receiving more international containers into Marlborough. A new operator with overall responsibility for biosecurity had come on board, and there was a need to ensure enough staff were trained as accredited persons. In the vineyard, biosecurity was reasonably well-understood; awareness material was made available to staff, and processes were in place to mitigate the risks posed by machinery and equipment movement between Pernod Ricard sites, which are widely spread across the region.

“Looking at the commitments of the pledge, everything that we were pledging to do is either what we are already doing, or should be doing anyway,” says Tracey. “Signing up to these commitments was a way of highlighting to the rest of the senior leadership team - and our whole organisation - that biosecurity is a business priority for us. We could be hit at multiple levels by a biosecurity incursion – a national level, affecting the whole country, an industry level, or an organisational level. We don’t want to be looking back and thinking, ‘how did that happen?’”

Biosecurity Business Pledge partners are allowed to use the pledge logo and stamps on their branding, communications and marketing material. “I like how the campaign has been designed, the whole ‘this is us’ approach,” says Tracey. “It relates well to the ‘team of 5 million’ theme used during Covid; it’s about bringing people together.”

What changes has Pernod Ricard Winemakers made so far as a result of signing the pledge?

“It’s given us a platform to raise awareness within our own teams, particularly in the winery,” says Tracey. “There is a requirement for staff awareness and training – we’ve made sure this has been strengthened in our site inductions with new staff or contractors coming on site. They get information about the fact that the site is a transitional facility, what to watch out for, what to report, how to report it.”

Signing the pledge was also a prompt for Tracey to check with Pernod Ricard’s procurement team to confirm biosecurity is part of supplier agreements. “Are we actually asking the right questions with regards to biosecurity, are we assessing them on that basis? It was good to get the answer back as ‘yes’.” Suppliers to Pernod Ricard have to meet certain supplier standards, which include a questionnaire. If a level of risk is highlighted, the supplier may be put through an EcoVadis assessment, covering sustainability, ethics, human rights, labour, and biosecurity measures, before Pernod Ricard decides to do business with them.

On the vineyard front, signing the pledge has prompted a review of Pernod Ricard’s biosecurity-related processes. “We have procedures around just about everything,” Tracey explains. “Whether it’s the movement of vehicles, traceability, or monitoring and reporting. We’ve got posters up in our staff amenities for awareness, but are they current? When did we last put our vineyard operators through basic biosecurity awareness training? Does that training include new and emerging risks? We are re-looking at everything we are doing, ensuring it’s fit for purpose and up to date. It’s been quite timely to have a good look at how we are actually performing here.”

Pernod Ricard Winemakers has recently shifted to the use of Microsoft Teams for internal communications, and Tracey was quick to spot another opportunity to raise biosecurity awareness amongst staff. “We’ve created a Teams channel which is dedicated to biosecurity, so we’re able to post on that straightaway whenever new information comes through. Even things like NZW’s Pest of the Month, we can get it up on there straightaway and it gets some conversations going.”

What’s next for the business pledge and what can businesses expect if they sign up?

The first members’ forum for the Biosecurity Business Pledge took place on 25 February and there are now more than 80 New Zealand businesses signed up. The steering group is developing a proposed Programme of Activity based on some of the discussions arising at the forum, structured around themes such as initiating a ‘toolbox’ of common resources to help businesses implement good biosecurity practice, and reviewing biosecurity training needs and training availability for businesses. Continuing to build the pledge as a business network for peer-to-peer learning, collaboration, and leveraging the pledge as a means to continue conversations with Biosecurity New Zealand regarding the regulatory framework are also priorities.

NZW encourages all members to consider signing up to the Biosecurity Business Pledge. Pledge partners are invited to attend regular forums and online catchups, which provide excellent opportunities to learn about what other businesses are doing in the biosecurity space. Pledge members are also regularly updated with what is happening throughout the New Zealand biosecurity system via interactive sessions with Biosecurity New Zealand senior staff. More information about the Biosecurity Business Pledge, including how to sign up, can be found at thisisus.nz/biosecuritybusinesspledge

NZW would like to thank Tracey Marshall for taking the time to share her insights for this article.

How ready are we for a Lepidopterean incursion?