Blown away by shaking 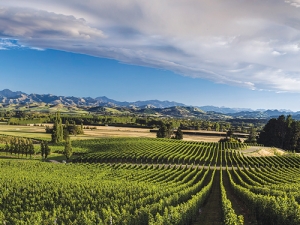 Botrytis is the scourge of winegrowers the world over. It is costly to control, impacts on the ensuing wine and can greatly reduce yields.

No one knows that more than Fin Grieve, vineyard manager for Mt Beautiful Wines in North Canterbury.

The two blocks, one of 2 hectares, the other 0.7 hectares are in an area where long lasting fog can be an issue, Grieve says.

"The fog is always at the same time of the year, October and November. It comes in around the flats and river, builds up quickly and rolls over the hills we are on. It can get quite thick, coming in at midnight and not clearing until 10 or 11 in the morning. The high moisture content is in among the vines for long periods of time and that makes it difficult in terms of disease pressure."

In an attempt to try and manage the botrytis levels in the Riesling blocks, Grieve moved away from cane pruning to spur pruning four years ago. While that helped to a small degree, there was still a minimum of 30 percent fruit affected by the disease.

Mark Allen, project manager for New Zealand Winegrowers' research project 'New opportunities for sustainable grape thinning', suggested Grieve might like to consider mechanical shaking in an effort to reduce botrytis levels even further. While he was interested, Grieve said there were some issues that prevented him from taking Mark up on the offer.

"It always seemed to involve using a harvester at the times I really needed to use it for leaf plucking and trimming, so that was the main reason I never got into it."

But 2015 was a watershed year for Mt Beautiful Wines, in particular their Riesling. He says it followed on the back of some bad vintages where more than 50 percent of the fruit was lost due to botrytis, followed up by a winery mishap that saw all the Riesling fruit lost.

"So we were out of any good stock for the US and my CEO said it would be really good if I could make something happen this year. That was my priority for vintage 2015."

Following some early rain, he noticed the build up of rubbish amongst the bunches. It was enough for him to reconsider Mark Allen's suggestion. And despite his earlier qualms about the timing of turning the harvester from its leaf plucking set up to a shaking one, Grieve was pleasantly surprised.

"We took the leaf plucker off the harvester and set it up for shaking and it turned out to be a pretty quick and easy swop. Within a couple of hours we had it set to go."

Initially he intended to trial the shaking method in a limited number of the Riesling rows. The instant results though, changed his mind.

"We did a couple of rows and then stopped. I grabbed a couple of buckets and went down those we had shaken and those we hadn't, took about 60 to 70 bunches from each row and shook them into the bucket. The rows where we hadn't shaken had about 10 times more rubbish in the bunches, than the rows where we had shaken. I thought that was a pretty positive result, so we went ahead and did the whole block."

He also did every second row in the Pinot Gris and Chardonnay blocks and 10 rows in the Pinot Noir. The entire operation took only a day and a half – which he says was nowhere near the big deal he had thought it would be.

"The thing I had been negative about was that it would be hindering our operation of leaf plucking. But it wasn't such a big deal after all."

So just how effective was it?

Grieve was "blown away" by the results. He literally could not believe how clean the fruit was.

"We had nil botrytis where we had always had 30 percent minimum. Some years we had 50 percent. Sometimes we had to go and do two or three drops of fruit just to get the botrytis out. Not this year.

"I was just blown away by what we had achieved. Okay we had a drought here in North Canterbury and the rest of the season was about as good as you could get. But I have had good seasons before and I have still had to deal with botrytis. Not this year, it just didn't happen.

"I was so excited, as the fruit was nice and clean and we had the biggest intake into the winery that we have ever had."
It was a similar story in the Pinot Gris and Chardonnay where the fruit was cleaner, the skins thicker which meant Grieve could let it hang longer to maintain optimum flavours. He says the wines that are coming through are also "pretty special".

"We are very, very happy I can tell you. And we will be doing it again from now on," he says with enthusiasm. "It took two days at the most out of our operation, but it saved us days of dropping fruit and the cost of that. And if this coming season is as good as last year I am pretty confident that we will be able to have less chemical input into the vineyard."

In terms of how to go about shaking the vines to remove rubbish rather than yield, Mark Allen has provided the following details.

Operational Information For Shaking To Remove Trash And Not Crop

Collector plates and belts = none required for trash removal only.

For more information on this technique, you can access a New Zealand Winegrowers fact sheet at nzwine.com

While many tear their hair out over vexatious problems like botrytis, powdery mildew and achieving nil-residue in wine, Gisborne's Trevor Lupton regards such things as challenges.

It was the trial very few wanted to take part in – although given the results -  more may have wished they had done so.

This season Zelam is set to launch a new product onto the market for the control of Botrytis and Downy Mildew in wine grapes.