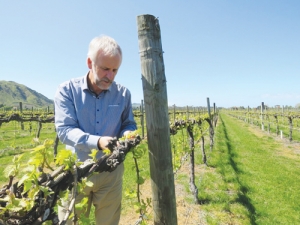 While many tear their hair out over vexatious problems like botrytis, powdery mildew and achieving nil-residue in wine, Gisborne's Trevor Lupton regards such things as challenges.

The horticultural consultant who has conducted extensive research into the control of fungal diseases in grapes says using science to solve production problems is a real passion for him.

He enjoys taking the technical and scientific material from his field trials and translating it into language that growers can understand and apply.

"I get up in the morning thinking 'how can I crack this one?' That's exciting work for me," he says.

And the wine industry certainly throws up more than its fair share of conundrums, some taking longer to 'crack' than others.

At high school, Lupton was interested in science but he didn't want to go down the botany or chemistry path.

"I wanted to use science in business so I did a Bachelor of Horticultural Science at Massey University and what I'm doing now is the perfect amalgamation of both," he says.

Originally from Wellington, Lupton came to Gisborne in 1982 with the Ministry of Agriculture and Fisheries as a horticulture advisor. He began work with Lewis Wright Valuation and Consultancy in 1986.

Two thirds of his work involves supervising 100 hectares of horticultural crops planted in kiwifruit, persimmons and apples, and some consultancy work including vineyard financial forecasts.

"This gives me a good feel for the economics of horticultural cropping," Lupton says.

"There's a strong economic focus to my work."

The rest of his time is devoted to field research. The subject of his research in the 1990s was botrytis which emerged back then as a major problem in the Gisborne district.

"Botrytis had become resistant to an earlier-used fungicide (Rovral) so growers were using Euparen DF and Shirlan as well as Captan and Bravo as broad spectrum applications," he says. "Then in the late 1990s, Switch and Scala came onto the market. Growers began asking questions about the relative merits of each product, what to apply and when. At $140 per hectare to apply just one product, the cost of controlling botrytis was significant so we decided it would be beneficial to evaluate the products in the vineyard."

In 1999-2000, Lupton and independent consultant Andre Geelen (managing director of Agrivet Services) undertook extensive trials on Chardonnay clone UCD 6 in Gisborne and Hawke's Bay comparing existing fungicides and new fungicides. The research, funded by the wine industry, demonstrated the clear superiority of Switch and Scala. Once they were adopted by growers, there was a huge improvement in levels of botrytis control.

"As a result of our findings, there was a major step-change throughout the New Zealand wine industry," says Lupton.

In collaboration with writer and editor Ruby Andrew, Lupton produced a book in 2013 entitled Understanding Botrytis in New Zealand Vineyards that went out to all levy-paying winegrowers. Published by NZ Winegrowers, it covered the biology of botrytis, its lifecycle, impact on wine and the management of the disease in the vineyard, and soon became the Bible on the disease.

"The important thing about the book was that it pulled it together the last 25 years' of research and put it into context for growers," he says.

However, there was no chance to rest on his laurels. With the growing emphasis on residue-free wine from the mid-2000s, the next problem facing the industry was achieving that goal.

"Where there is high botrytis pressure, residue-free fungicide options have not been up to the challenge so research is now going into the timing of using conventional and soft fungicides combined with bio-controls and cultural solutions such as maintaining an open canopy through leaf plucking and regular close trimming."

Lupton has been involved with industry trials and grower evaluations in the commercial development of a bio-control for botrytis (Botry Zen) based on New Zealand research.

He is also part of GrapeFutures, a three-year project in conjunction with the Gisborne wine industry to develop commercial best practice for botrytis control in an ultra-low wine residue environment.

"The botrytis problem has not gone away and we can expect to see resistance to the current fungicides appear. We need to keep analysing existing products to see if they are still working, and keep looking for new products to take over."

Lupton says with an El Niño year forecast, there will be hot and dry conditions which do not favour wet-weather fungal diseases like botrytis.

The next problem to arise was powdery mildew, "a tricky beast to work with", says Lupton.

"Powdery mildew surfaced in a big way in Gisborne and Hawke's Bay in the 2012-13 season and to a lesser extent in Marlborough. Many growers experienced problems managing the disease with some crop rejection or requirements to drop infected bunches prior to harvest," he says.

In response to this, NZW brought experts Peter Magarey and Trevor Wicks over from Australia, and Lupton has been conducting research work and field trials on the efficacy of powdery mildew fungicides.

The research confirmed a few of the fungicides that growers had been relying on for the past 20-30 years had lost some of their effectiveness.

Why did this happen?

The timing coincided with the establishment of chasmothecia (the sexual stage of powdery mildew) in New Zealand. Chasmothecia (or cleistothecia) was officially identified for the first time in New Zealand in January 2014 by Peter Wood from Plant & Food Research Ltd.

"It is not known how long the sexual form has been present in New Zealand but the asexual variety of the disease has been around since the colonial era. The Europeans have lived with chasmothecia for 200 years and Australia for 30 years. It's all about managing fungicides," he says.

However the testing of fungicides for grapevine powdery mildew is very complex.

"It is a green disease which can only live on green grape tissue such as leaves, shoots and young berries. It can't be grown in an agar plate."

A key piece of the puzzle was unravelled this year by Rob Beresford and Peter Wright's team from Plant & Food Research.

The mainstay of powdery mildew control is sulphur and Lupton's work for New Zealand Winegrowers this year focusses on identifying the optimum rate of sulphur to use and whether sulphur's activity is improved with the addition of a spreader.

"It is possible to manage vineyards with a high level of powdery mildew infection in the previous season and achieve low levels of infection at harvest the following year. Powdery mildew can be managed, but growers have to ensure that chemical choice, timing, application rates and spray coverage are all effective.

"I think the industry in now in a better space.

"When I see growers having problems, I want to understand why. If I can use science to solve these problems and get the information out to the people who need it, then that's worthwhile."

In addition to field trials focussing on the control of fungal diseases in grapes, Lupton conducts research into kiwifruit, persimmons, citrus, sweetcorn, avocado and residue trials.

As a consultant, he is involved in property evaluation, financial forecasts, and crop selection including gross margins, analyses of annual crops, economic analyses of permanent crops, technical and management advice, and assistance with horticultural valuations undertaken by Lewis Wright Valuation & Consultancy Ltd.

Blown away by shaking

Botrytis is the scourge of winegrowers the world over. It is costly to control, impacts on the ensuing wine and can greatly reduce yields.

If there is one issue that has got growers scratching their heads – it is the influx of powdery mildew. Most regions in New Zealand suffered from it this year, some more than others.

It was the trial very few wanted to take part in – although given the results -  more may have wished they had done so.