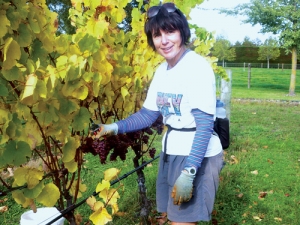 Catherine Hardiman at work over harvest.

A student research project has produced promising results for an indirect approach to reducing mealybug infestations in vineyards.

The project says this can be done by controlling the ants that protect and milk the insects for their honeydew.

Catherine Hardiman, who undertook her study during the last growing season to fulfil a final-year research requirement for her Bachelor of Viticulture at EIT, believes the results provide "some significant, far-reaching possibilities for the New Zealand wine industry."

Vectors for Grapevine leafroll-associated virus 3, mealybugs transmit the infectious virus from plant to plant while feeding on the phloem of the vines. Mealybug-spread GLRaV-3 has wreaked havoc in New Zealand vineyards – as Hardiman points out, it is the most harmful of all the grapevine leafroll viruses.

Mealybugs are the main vector for GLRaV-3 in vineyards worldwide.

Several ant species are known to disrupt the biological control of mealybugs by protecting them in the vine canopy from their natural enemies. They do this to protect their primary food source, honeydew secreted by the mealybugs.

For her research project, Hardiman trialled bifenthrin, a synthetic methylpyrethroid ant toxin. The trial was based on six paired treatment/control replicate plots, randomly selected in Te Mania's Pinot Noir clone 115 block in Nelson, where Hardiman lives and where she studied by distance.

About every five days, ant and mealybug activity was monitored before and after ant toxin treatment.

On March 3, X-it Ant was sprayed on vine trunks and posts of treatment bays at an effective bifenthrin concentration of 240ppm.

The study found significantly fewer ants on average at posts of bays where the ant toxin had been applied compared with the control bays.

The mealybugs were counted by searching the vine canopies of each of the vines in control and treatment bays, again over a five minute period. The study found a significant reduction in average mealybug counts in bays treated with ant toxin compared to untreated bays.

"This is an exciting result which needs further study, which could suit a master's student project."

Enjoying a break after seven years of concurrent degree study, Catherine Hardiman sees the need for further research around the use of ant toxin as a strategy for the indirect control of mealybugs which vector leafroll virus in vineyards.

Graduating with EIT's Bachelor of Viticulture and Bachelor of Wine Science, Hardiman appreciates the import of her final-year student research project and is now considering undertaking a thesis for a master's degree.

"We had some very exciting results," she says of the trial, which showed that mealybug populations crashed in bays where vine trunks and vineyard posts were sprayed with the ant toxin.

The idea for her investigation was triggered by a discussion between EIT research scientist Dr Petra King and Key Industries technical manager Peter Visser about the interaction between ants and mealybugs.

While the conventional approach to controlling the spread of leafroll virus is to target mealybugs as the vector of the disease, they were interested in what might happen to mealybug numbers in the vineyard if the ant populations were controlled using the ant toxin.

Ants protect mealybugs from predators and parasites, King says, farming them by tending them and placing them on parts of the vine that suit them.

"I was just doing a student project and you don't necessarily expect such serendipitous results," she says of her findings. "Obviously there needs to be more research done around different aspects it has thrown up as well. It certainly warrants having another look at."

If she does decide to progress to a master's, Hardiman would ideally like to do so while working in the industry.

"My EIT learning journey has been rather like an Educating Rita experience," says the mother of seven. "And yes, they're all my own and by the same guy. I don't tend to do things by halves."

Before she and husband Chris started their family, Hardiman briefly worked as a laboratory technician for DSIR.

"But I didn't quite finish my qualification before babies. I'm a Joanna-come-lately. I think there was at least four [children] living at home when I returned to study. I now have four grandchildren as well."

Hardiman worked for a time as a science technician at a local college but what she really wanted was to be was a winemaker. It was husband Chris who found her the online study option at EIT.

Fitting in as much part-time study as she could manage, she also gained work experience with several vintages at Greenhough's boutique winery near Nelson.

"I really enjoyed work in the vineyard during summer and I loved the physicality and buzz of vintage," the 50-something-year-old says. "Climbing up tall ladders to tanks and standing at height doing plunge downs didn't faze me at all."

Based in Nelson, Visser mentored and advised Hardiman and managed the applications of the ant toxin to selected vine trunks and posts for the trial.

"X-it Ant is designed for ant control in outdoor urban situations and we hoped it would also have relevance in controlling mealybugs," Visser says. "To get that level of effect achieved with the trial is actually astounding."

Mealybugs and under vine management